What is shotgun choke and how can it help you to shoot more accurately?

Shotgun choke does as it sounds. Chokes. That is, it constricts or narrows the barrels of a shotgun. This has the effect of reducing the pattern so that the density of the pellets is increased, which gives a stronger result. Visualise shotgun choke in the same way as a camera aperture which opens or reduces to give more or less light. So how does this help gameshooters and clayshooters?

The more open chokes are, the larger the diameter of the shot cloud or pattern. The tighter the shotgun choke, the smaller the pattern. Chokes won’t magically improve your shooting and probably won’t help you hit the target more often. However open chokes can be good for closer targets and the standard quarter & half choke (more on this later) is a good place to start. Having very tight chokes, particularly full or extra full, and squeezing heavy loads of large shot through them will often result in deformed pellets that do not fly true.

Most of us don’t shoot well enough to get any real benefit from chokes. So opt for fixed chokes or ones that are very open. However if you are a very good shot then screw-in chokes may help.

The first wave of screw-in chokes appeared in the late 1970s with the Winchester 101 series of guns. Since then, multi-chokes have been very popular, both as factory standard and as custom attachments from specialist makers.

If your gun has multi-chokes, ensure they are tightly screwed in

Multi-chokes offer tremendous versatility without the need to own a number of shotguns, but they need to be looked after if they are to remain trouble-free. Always pay close attention to the manufacturer’s instructions for the maintenance of multi-chokes. Multi-chokes sit in a section of the muzzle that has been specially machined to receive them. It is vitally important to ensure that they are screwed fully home so that there is no gap between the inside of the barrel and the base of the choke section. If even the tiniest gap exists, there is a very real possibility that serious damage will occur to the gun.

As a general principle, multi-chokes should have their threaded sections very lightly greased with something similar to Vaseline before they are screwed home. Beware of over-tightening, and if you are unfortunate enough to get a choke stuck, do not force it but take it to a gunsmith for “surgical” removal.

Looking after your chokes

Check that your chokes are screwed home fully before use and repeat this check after and periodically during use. Chokes should be cleaned occasionally by immersion in petrol or a similar solvent. Pay particular attention to the threads and make sure that foreign bodies such as grit are removed before installing the chokes again. Always discard a damaged shotgun choke tube.

The smaller the shot size, the more pellets there are to the ounce: No. 4 shot is 135 to the ounce, No.5 is 170, No.6 is 225 and No. 7.5 is 350. It follows, therefore, that if you reduce the number of pellets in a cartridge, the pattern density will also be reduced and there will be more “holes” in it. The only way to increase pattern density is to tighten up the choke, which is not good for the average 20-yard shot, or increase the weight of shot in a cartridge, which generates more felt (perceived) recoil.

Using a fibre or plastic wad will also affect the pattern density. Generally, a plastic wad will give a tighter pattern than a fibre wad. As conscientious, environmentally-concerned shooters, we should avoid using plastic wads however.

Good stance, gun fit and technique are as important as the right chokes

Chokes for clays and different quarry

Use half and half choke for all types of quarry, and just use a range of different cartridges. If you are shooting lower birds, you can use lighter loads, and when you go high-bird shooting, you can shoot heavier loads such as 32gram No.5 shot, or heavier. Don’t forget that if you put the lead in the right place, the bird will die. Chokes won’t make you hit or miss… but they may make your kills better.
Find a cartridge you like that patterns well with your chokes — different cartridges behave in a different manner in different barrels, so it is worth spending some time on pattern plates.

A side-by-side generally has the more open choke in the right barrel/front trigger. This dates back to the days of muzzle-loaders, when game was walked- up over pointers. The first shot at a departing target would be the closer shot. With the advent of breechloaders and driven shooting, this remains unchanged, yet the first shot should be further away and the second directly overhead. The same applies on flighted pigeon or duck and geese overhead. You can select which barrel/choke to use on a shot by judicious use of the triggers on a double-trigger gun or the selector on others.

I’ve never been able to make up my mind on what’s the right amount of choke to have in a gun. Tight guns bring certain advantages when shooting any of the five trap disciplines, but how much — or how little — is best for a gun used in the field, or on a sporting clay range?

The quarter/half approach probably is the best middle-of- the-road solution for most people’s needs.

Former Browning (UK) managing director Andrew Young and his gunsmith used to cringe at the sight of my 125’s bare chequering, wonky extractors and worn chambers whenever I used it in their company. I bought the 30in gun new about 25 years ago with, you’ve guessed, quarter and half-choke barrels. It was, and still is, a nice enough gun to shoot.

But it held a secret that I didn’t pick up on for about 10 years or so. Not once did I suspect anything was untoward. Why would I? The gun killed the highest of pheasants clean as a whistle, as well as everything else from geese on the foreshore to snipe, clays and woodpigeon over decoys or coming to roost. Then I thought: “Maybe if I had more choke I might pick up a few extra clays in competitions? So off it went to a lad in Suffolk who specialised in fitting “invisible” internal choke tubes. My instruction was to make four: full, three- quarters, heavy half (about 22 thou) and true half (20 thou). Three weeks later, I went to his workshop to collect the gun.

“Robin, what chokes do you think you’ve been using all this time?” he asked. So I told him quarter and half as supplied by the factory. “Best think again,” he said.

It turned out that the bottom barrel, when he took the micrometer to it, measured a gnat’s whisker over true cylinder and the top, improved cylinder. I was mystified.

“It seems to me that these tubes started off at 32in but, for some reason or other, they were cut down in the factory,” he said.

“They actually measure a little less than 30in and if you look, whoever refitted the foresight bead didn’t even get it central to the rib.” True enough, it was off-centre by about 2mm.

I would like to say the expensive conversion brought about the improvement I had hoped. However, fitting the gun with much tighter chokes didn’t make an iota of difference — instead, my Sporting average actually dipped!

It’s been my pleasure to watch more than a few competent game Shots kill very tall pheasants cleanly and consistently with small shot and open chokes. Best — in more ways than one — was an elderly gentleman knocking down high birds and making it look so easy with standard Eley Grand Prix No.6s and an English side-by-side with only improved cylinder out in front.  If you do have a multi-choke gun in the cabinet, screw-in cylinder and quarter, use a decent cartridge, and see how you fare. 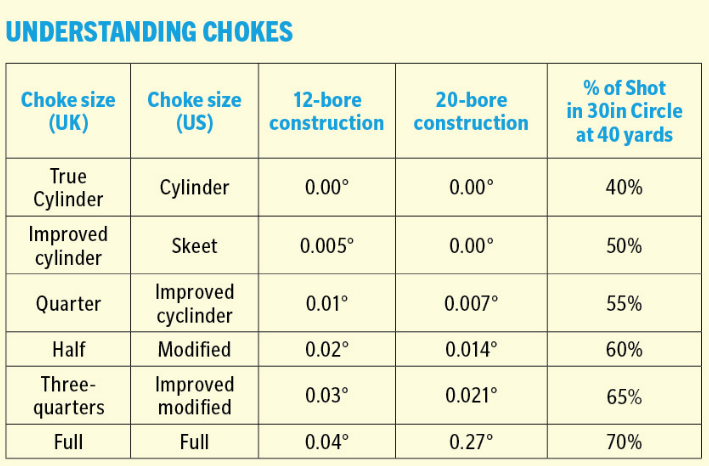 Choke denominations used in the UK are usually expressed as:

In the USA those terms are usually described as:

This article was originally published in 2016 and has been updated.