If you want a good working dog that will do the job and aren't worried about a pedigree, then why not get a rescue dog, says David Tomlinson

There are hundreds of gundogs out there in need of a good home. So instead of buying a pedigree puppy, why not investigate getting a rescue dog?

If you haven’t had a puppy before or haven’t had one for perhaps 12 or 13 years it’s easy to forget how active and lively they are, demanding and even destructive. Training a puppy takes many patient months and it won’t be ready to go into the shooting field for over a year.

This is an e mail I recently received. “Due to the passing away of a family member we have a male springer spaniel that is looking for a home. Monty is black and white, six years old and has been trained as a working dog so is extremely well behaved. He is a very affectionate, happy dog with full inoculations/ microchip/vet history. He is great with kids and is very gentle but he does need a lot of exercise.”

I thought Monty sounded ideal for someone looking for a working gundog as a pet and shooting companion.

The adaptability of a rescue dog

Dogs have an amazing ability to adjust to a new home and I’ve met a number of rehomed working dogs who have successfully made the transition.

Tashi wasn’t a rescue dog, but his original owner lived in London and realised that a dog with such obvious ability should be working, rather than just being a pet. As a result Howard took him on, and enabled Tashi to fulfil his obvious  potential. Howard is a professional gundog trainer, but until Tashi he had never owned an HPR before, so both dog and handler were on a steep learning curve.

It wasn’t an easy road though. When Howard first sent Tashi to retrieve a partridge, he did so with speed and style and ate the bird, instead of bringing it to hand.

Rescue centres are often full of springers because the owners cannot cope with their energy.

But after some more training Tashi understood what he should be doing. He won his first-ever trial, an encouraging start, followed by certificates of merit at his next three trials, and finished his first competitive season by winning an all-aged stake. The following November he won the Kennel Club’s HPR Championship, the most prestigious prize in HPR trialling.

Rather than trialling our dogs, most of us want little more than a steady and reliable companion for our shooting outings. For many of us there’s no need for a pedigree dog with papers, and it doesn’t matter too much whether it’s a cross-breed, either. Michael Horne’s dog Darcey is a cross between a springer and a Border collie, and she clearly has plenty of the springer’s natural working ability.

Gundog breeds are well served by specialist rescue sites on the Internet. Rescue centres are often full of gundogs because the original owners underestimate their energy. They are all run by dedicated volunteers who undertake the work for no other reward than the satisfaction of finding a dog a new home.

Rehoming is taken seriously. Springer Spaniel Rescue, for example, lists nine strict rules that apply to anyone who wants to rehome a spaniel. These range from previous experience or knowledge of the breed to having the financial security to pay for veterinary treatment. The rules are so sensible that if they applied to everyone taking on a springer puppy in the first place, there would be far fewer dogs in need of rehoming.

The problem, of course, is that there is no creature more appealing than a spaniel puppy, with the result that many people buy them with no thought of the boisterous dog they will grow up to be.

We all know the saying that you can’t teach an old dog new tricks. It’s not true, and I’ve met a number of mature animals that have made good gundogs, despite not having had any training as a puppy. So if you are after a new gundog, why not consider rehoming a rescue dog?

Beating with a pair of rescued springer spaniels

Reader Geoff Roy has a pair of rescue springer spaniels and contacted me to say how much fun he has had beating with them. I met Geoff and he gave me a demonstration of the spaniels: I was impressed.

The elder of the two is Digger, whom Geoff rescued when he was 13 months — he is now nearly six. “It was quite clear from the start that Digger had been to obedience classes for all the basics, while I suspect that his former owners exercised him with a tennis ball, as he is tennis ball obsessed. I don’t think that he had encountered water as he had to be taught to swim, which he now loves.” 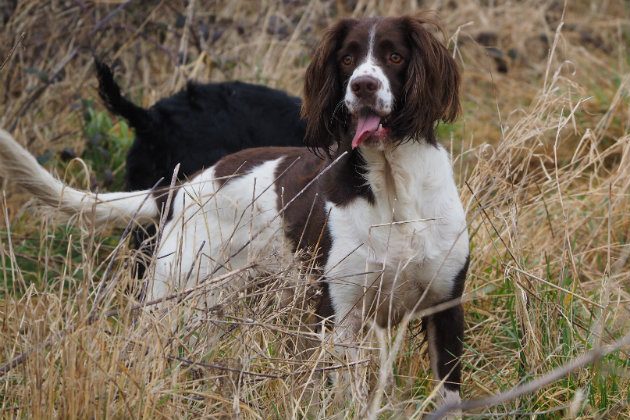 Rags, “the good-looking one” came to Geoff from rescue at six months old completely untrained

Unafraid of any cover

“He will also retrieve fallen game from land or water, but rarely returns it to hand, simply dropping it where I can see it. He does have a soft mouth and will fetch live birds but clearly doesn’t enjoy it. He’s my self-employed dog. Unafraid of any cover, hunts well but ranges too far for most handlers’ liking,” Geoff continues.

“My younger dog, Rags (Ragamuffin), is the good-looking one. He’s now nearly four and a half, and came to me from rescue at six months old. He hadn’t had any training at all when he arrived. Though he loves the water he is reluctant to swim out of his depth. He will readily retrieve dummies or game to hand but has  a hard mouth. Live birds are usually killed outright before he brings them back. He is wary of dense cover but will go in when encouraged but less  so if he smells nothing. Unlike Digger, he hunts close all the time.

“Both dogs were neutered as  a matter of rescue policy and not  law. Their previous history was unknown and is more guesswork than fact and I can only go by what I was told at the time of getting them. They both have full tails but have had their dew claws removed by my vet under general anaesthetic.

“They are rough shooting dogs and not suitable for picking-up as they haven’t the patience to sit and wait. Neither is in the least bit gun-shy. Both are obedient and a joy to have around, work well in the field and are good companions in the field and at home.”

Geoff concludes: “My dogs prove that rescue dogs can make competent or even really good working gundogs. It’s all down to their training and their handler. And I don’t believe that the age of the rescue animal is an issue either. Rescue dogs often come with behavioural issues which may take some time to iron out, but that shouldn’t be beyond any competent handler, especially if the dog comes from sound working stock.”