What’s happened to the flatcoat retriever? 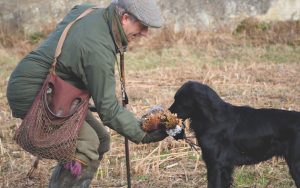 What is it about the flatcoat retriever that makes it so successful at Crufts? It’s a question lots of showing enthusiasts have been asking themselves after Norwegian-owned flatcoat retriever Almanza Backseat Driver, or Baxer, took the coveted Best in Show title at the show in March 2022. This puts the flatcoat in joint fifth place in the list of the most successful breeds at Crufts, for this year’s win was the third for the breed. The first was in 1980, the second in 2011. To put this success into perspective, you have to go back a long way. Labradors have also taken the title three times, but the last victory for Britain’s favourite breed of gundog was back in 1937, when Lorna, Countess Howe, won for the third time. Countess Howe was one of the last exhibitors at Crufts to both show and work her dogs with equal enthusiasm, for she also won the Retriever Championship on three occasions. Perhaps most surprisingly, Best in Show is a title that has never been claimed by a golden retriever, usually the most numerous breed to be shown at Crufts. This year, 458 golden retrievers were entered, along with 456 labradors. In contrast, there were 224 flatcoats but, when you consider it, that’s a very high number, because the breed is vastly outnumbered by both the other retrievers. It’s a fact that today the flatcoat is considerably more popular in the show ring than on the shooting field. Over the years, I’ve seen a lot of flatcoats out shooting, almost all being worked as picking-up dogs, something at which they excel. I’ve heard it argued that the flatcoat is the best picking-up dog of the lot, a fact that many labrador owners would dispute, but there’s no doubt that a well-trained flatcoat can be impressive: soft-mouthed, good nose and able to work on its own initiative. The downside of the flatcoat, at least according to owners I have spoken to, is that it is the Peter Pan of the gundog world, as it takes time to mature and is generally much slower to learn its trade than a labrador. I have also heard other trainers say this isn’t true and that too many handlers use it as an excuse. Treat the dog as you would a labrador and you will get the results you are hoping for. However, when it comes to retrieving competitions, there’s no doubt that the labrador has the edge. It’s hard to define why, but labradors have that little bit of extra drive that is essential to bring home the trophies in trials and tests, making FTCh flatcoats extremely rare animals. As far as I am aware, only four FTCh flatcoats have been made up since the war. The first and last time a flatcoat won the Retriever Championship was in 1912. (Read more What do the letters FTCh mean?) Flatcoat retriever working lines To the unpractised eye, there’s little visual difference between the show and working strains of … Continue reading What’s happened to the flatcoat retriever?

Copy and paste this URL into your WordPress site to embed

Copy and paste this code into your site to embed