The sprocker spaniel is becoming a firm favourite, with the fact that it's not recognised by the Kennel Club seemingly making no difference

The sprocker spaniel – a deliberate cross between English springers and cockers — is becoming more and more popular and it’s not hard to see why. Once springers had real substance but today’s trialling dogs are often unattractive, albeit quick dogs. Whilst with cockers there are concerns about a lack of genetic diversity.

The land spaniel is the ancestor of both cockers and springers. Once the same litter could be used to breed cockers and springers – the bigger animals above 21″ at the shoulder were springers, the ones below this cockers. Over time selective breeding of the sizes resulted in the two breeds.

The sprocker spaniel is not a mongrel or cross-breed

Lynda Elliott, sprocker enthusiast and owner, says people need to understand that the sprocker is not a mongrel, a cross-breed or a designer dog. It is 100% spaniel. She says: “I believe the sprocker is taking us back to what the springers and cockers were like back in the 1970s and early 1980s. Strong hunting dogs with a biddable nature.”

She continued: “I’m convinced that the sprocker is the ideal first spaniel for a novice. They tend not to be as highly strung as the springer nor as stubborn as the cocker, but they have retained that important drive that enables them to hunt all day and still have energy for duck at night. In my experience, they are easy to train, loyal and eager to work. They are also handsome dogs and come in the same variety of colours as the cocker.”

Another sprocker owner who shoots says: “I got my first sprocker because I was looking for an old-fashioned English springer spaniel, but found it almost impossible to find one without lots of red ink in the pedigree, which I didn’t want,” he explained. “So I gambled on a sprocker spaniel and haven’t been disappointed. I now have five and find them healthier and hardier compared with their pedigree counterparts.”

Not an official breed

However many owners are infuriated by the Kennel Club, which bars sprockers from entering any tests or trials the breed is unrecognised by the body. Sprocker enthusiasts are certain that their dogs would outperform springers or cockers in competitions.

Lynda comments: “We simply want the sprocker to be acknowledged as a spaniel so it falls under the umbrella of AV (any variety) spaniel so it can compete against other spaniels.”

Because sprockers are not an official breed, the KC receives no revenue from registrations, so there’s no incentive for what would be a major rule change. In addition owners of English springers or cockers might not be too happy about their dogs being beaten by non- pedigree spaniels.

There is now a Facebook page called Recognise the Sprocker Spaniel (RTSS) which has over 8000 members at the time of writing. Sprocker Assist and Rescue (SAR) was created dedicated solely to sprockers.

Whether the Kennel Club likes it or not the sprocker is a spaniel that’s here to stay, particularly as it now almost certainly outnumbers all our minority breeds of spaniel.

Could an inherited, four-year-old Sprocker become a good peg dog?

A good peg dog is rock steady, responds instantly to the stop whistle and is also able to take hand signals out on retrieve at a good distance. Take on an untrained  sprocker at this age and changing what is required is going to be difficult. However if the dog has been taught to sit and stay then reinforcing this training to apply to the peg shouldn’t be too much of a problem.

Sprocker spaniel – turning the clock back

Why does my sprocker refuse to retrieve?

Q: I have a two-year old sprocker that stops and hunts on command, stays very close and is highly attentive. However in the field she refuses to retrieve which is both embarassing and exasperating as she is otherwise a very hardworking dog. What can I do about it? Is there still time to train her or is it too late?

A:The first desire for any keen hunting dog is to find live game and in the wild it would be to satisfy hunger. Obviously, with domestication and training that inherent wish is controlled as you are feeding your dog regularly. However, the desire to eat is also the reason why a dog retrieves game to take back to its pack. Not making sure the retrieving instinct was nurtured to the highest degree in training before introducing steadiness to live game is probably why you are now experiencing a problem.

Your bitch must be taught to retrieve any object you wish on command. At present she can get away with being disobedient.

You need to change this so that the object in her mouth is the only way in which she can earn praise. Teach her to hold something in her mouth and reward her for it.

Once she is grabbing consistently for one object, then begin the process again with another until you are using cold game and finally fresh. On no account continue her hunting until the problem has been cured. It may take weeks but it will be worth your patience in the end.

Should you get a sprocker or cocker spaniel? I admit to being a fan of sprockers as I like their… 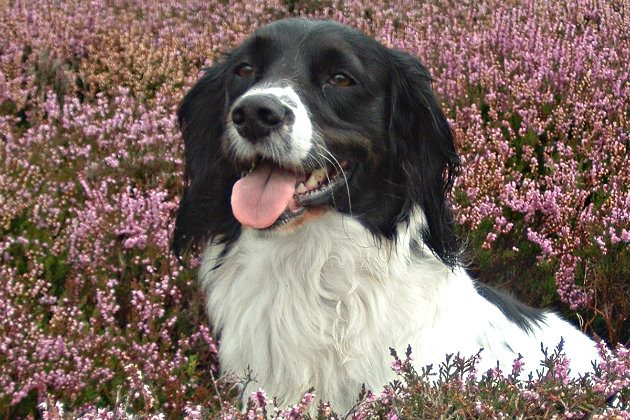 Every Monday starts full of excitement and anticipation. I watch as the curtains are opened, praying for good weather. Sometimes we’re blessed, sometimes we’re not.

Today fog fills the valley and as we travel out of the village the mist slowly disappears. Slowly the sun’s rays break through and by the time we reach the cattle grid the sky is bright blue and the sun is blazing. Just perfect

After a briefing on the day’s plan we’re set in a beaters trailer, 14 men and women and usually as many dogs (spaniels and Labradors mainly), laughing and joking. We’re pulled along by another willing helper (a police traffic cop actually) and we’re on top of Grinton Moor.

We’re only doing four drives today because the grouse are few in number and the shoot master wants to preserve stocks for next year.

We sit in the heather, nearly falling asleep, waiting for the signal, a horn blows indicating that the guns are in place and ready. We set off at full pelt, our humans waving flags from the start. Fourteen of them in a line spanning the moor. I’m captivated by the smells … rabbit, rabbit, grouse, grouse, rabbit. Finally after seven years I know what to do. It’s not been an easy ride!

The grouse fly in front of us, moving slowly towards the guns. From then on they seem to disappear. A few coveys fly over us, unconcerned by flags, and we move forward unperturbed. It’s a sporting shoot, no vast numbers falling from the sky. In fact a pair of binoculars might help on occasion!

BANG, BANG … the odd grouse falls. The drive is over and the picking up dogs set to work. I can’t be trusted with that job as I tend to eat the birds when I get half a chance! I do have a penchant for grouse heads.

On to the next drive, a similar scenario, the gun are in place and we’re off … oh a rabbit. I’m going to chase that one … and another. PEEEEEP, PEEEEEP … there’s Mum calling me back to work. Oh, a bog, I could do with a cool down … SPLASH! I’m up to my tummy in sticky, smelly peat … nice!

We stop for lunch after the third drive, it’s a warm day and the humans sit chatting and I eat my special biscuits (energy for the last drive as I’m getting tired now). I lie down and rest for half an hour and then we’re off again in the trailer, being bounced around and sat on.

The last drive is over. I’m shattered, the humans are tired, chatter is waning. Mum says “cheerio” and I curl up in the car. A hot shower when we get home, tea and then bed. It’s a dog’s life!