Size isn't everything says Paul Austin and this is why 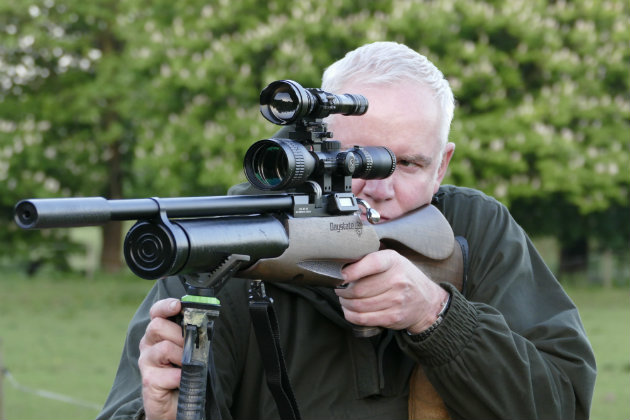 I shoot pretty much everything from sub 12 air rifle up to fairly hefty centrefires. The secret to success is to pick the right tool for the job. For 12flbs shooting you need to think long and hard before straying away from .177.

Most new shooters think that bigger must be better but in fact it isn’t. If you have limited power behind the pellet that’s simple not the case. If you don’t intend to stretch out further than your zero does the calibre really matter? Simple answer… No, not really. When ratting for example you’re unlikely to shoot much beyond 25 meters.

Three sub 12 ftlbs rifles and a single FAC Airwolf in .22. Marrying the available power to the correct pellet is vital

However, if you do need to take a closer or longer shot with a .22 you are going to have to do a lot more adjustments to compensate for the arc of the pellet. When time’s short and the pressure’s on remembering all of the above as well as accurately estimating range is tricky.

You might even enjoy the challenge of shooting the more extreme ballistic curve of a .22. It certainly takes skill to adjust for more varied hold-over/under. There’s nothing wrong with stretching your abilities but there’s no room for guesswork when you’re targeting live quarry.

A bit of back yard plinking can soon turn into serious cash, so making the right calibre decision is essential

The problem is you may start out with a bit of garden airgunning or back yard plinking. Then a few months later you’re out airgunning at all hours and taking a keen interest in the latest night vision gear. That is when you’re probably going to start wishing you’d opted for a flatter shooting .177 in the first place.

Pick the right air rifle for the job in hand

One of the first decisions anyone beginning air rifle shooting has to make is choosing a calibre. Unfortunately it’s not that easy. It’s not about likes or dislikes, knockdown power or penetration. It’s all about placement. The enhanced ballistics of the sub 12 ft lbs .177 simply makes accurate shooting easier over a wider variety of distances.

Believe it or not I’m actually a big fan and still own a .22 – it happens to be an FAC rifle where the .22 calibre is a perfect fit. I also own several rimfire rifles, so you may ask why keep a .22 in the cabinet at all?

This is the whole point of the article. It’s about using the right tool for the job with the optimum performance. For certain tasks an FAC air rifle in .22 is ideal, you don’t want to be slinging rimfire or god forbid centrefire rounds up into the canopy, which makes my FAC .22 the perfect choice for longer range pigeons, corvids and squirrels up in the branches.

Sub 12 ftlbs rifles a can be big money but a classic stock design is always a good investment.

Fieldcraft and placement are key

A .22 does deliver more energy into the target, it’s heavier and retains more energy but sub 12 ft lbs rifle shooting isn’t about energy, it’s about field craft and placement. Placing a pellet exactly in the right spot is everything and that’s much easier to do courtesy of the more forgiving ballistics of a .177.

How far are you planning to shoot?

Another classic quote “.22 has better energy retention” A .22 pellet does indeed have better energy down range but how far are you planning to shoot? 35/40 meters is about as far as any sub 12 ft lbs rifle should be used on game. Can you shoot it much further? Certainly – but only on paper.

The .20 calibre seems like a sensible option but it never really caught on in the UK. It’s basically a compromise calibre. Pick one of these and you’ll find that pellet choice on offer is very limited. You’ll also struggle to sell it second-hand. So my advice would be to avoid this calibre.

The .25 calibre is without doubt one of the best choices for an FAC rifle but it’s painfully slow at around 400fps, roughly half the speed of a .177. With just 12 ftlbs behind it, they’re basically a none-starter as a hunting round.

.177, .22 and the massive 30 cal. The classic diablo pellet is the best choice for serious shooters

I’ve never been convinced by this. A .22 travels just under 600fps while a .177 is usually just under 800fps. The .177 therefore gets to the target roughly 25% faster or 33% faster relative to a .22. At sensible ranges I’d be very surprised if there’s anything in it. If bucking the wind was such an issue why do the vast majority of competition shooters choose .177? They choose it because it’s faster, flatter and easier to maintain accuracy over varied ranges.

An air rifle is particularly suited for killing rats. With sensible use of backstops — most often concrete walls in…

Have you got an old airgun lying around in your gun cupboard? Now’s the time to take it out and…

The .177 scores well on penetration. If you’re planning to nail the occasional grey it’s without doubt the way to go. Squirrels are tough little critters and a .177 is the most effective round for the job with the smaller diameter and higher speed definitely provides superior penetration.

The truth is that you need more experience to handle this calibre and if you’re a new shooter then you’re likely to be lacking in it. It takes a long time and a lot of practice to really get to know your rifle. With a .22 over or under estimating range can have dramatic consequences A .177 is definitely more forgiving.

(This article was originally published in 2018 and has been updated)