Just what is a trap gun and how is it different?

A trap gun is designed for trap shooting and not much use for anything else. Trap guns are specifically designed for the discipline.

Features of a trap gun

A trap gun has a stock with adjustable comb

As the target is retreating from the shooter at quite a rapid rate, choking is usually quite tight: 3/4in the lower barrel (which is fired first), and full in the top.

Tighter chokes, such as full and full are common in trap shooting 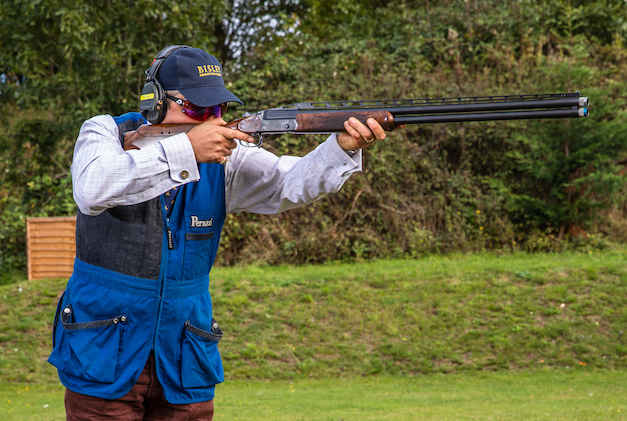 Shooting with a specialist trap gun

Trap shooting is one of the formal clay shooting disciplines and at its highest level an Olympic sport. Most people start on DTL (Down the Line) before moving onto ABT (Automatic Ball Trap), Double rise and OT (Olympic Trap).

How the term trap shooting came about

Clay target shooting started from live pigeon shooting. The machines that throw the clay pigeons are called traps after the traps that held the live birds prior to release. We call “pull!” to release the clay as they used to pull the cord to open the trap holding the pigeons. The term ‘kill and lost’ comes from this era but it is now more common to hear ‘hit and loss’. The format and shooting positions are founded on live pigeon days.

Most of the trap disciplines are shot in squads of five as there are five stations, but sometimes in squads of six with the spare waiting behind and moving in as the squad rotates. Stand 1 shoots first, then in sequence from 2,3,4 and 5. This carries on until all stations have shot five targets. Everyone then moves up one place to the right and stand 5 moves to 1. Station 2 then starts the second round and this continues until everyone has shot five targets on the five stations, a total of 25 targets.

Once you have been given the command from the referee to start, you are expected to call for your ‘bird’ within 10 seconds. There is then a gap of 10 seconds for the next call on station 2. You have to be aware that it is your turn but not load until the shooter before you has finished his or her shot. Once everyone has shot five targets on their station, the referee will give the command to change stations.

Down the line trap shooting

With DTL you can use 28g loads, but as you get into the Olympic disciplines you have to use 24g loads. In DTL, you score 3 points for a first barrel hit, 2 points for a second barrel hit and nothing for a miss.

Competitions are usually 100 targets, giving you a maximum score of 300. Other variants include double rise, single barrel and handicap by distance.

Concentration is vital as the targets are shot with the gun pre-mounted and with specific hold points, depending on the discipline and station you are shooting from. It is not uncommon to see shooting glasses with blinkers on the side to block any glare from the sun or other distractions. You are expected to stay still and quiet when you are not shooting. A towel is used to keep your hands dry to help you maintain a good grip. As the targets are often blaze (orange), glasses with red or orange tints can make the targets stand out more. It is important to note that when shooting trap disciplines, although the targets will be the same direction, speed, angle and elevation, different backgrounds can have an effect on perception of the target. 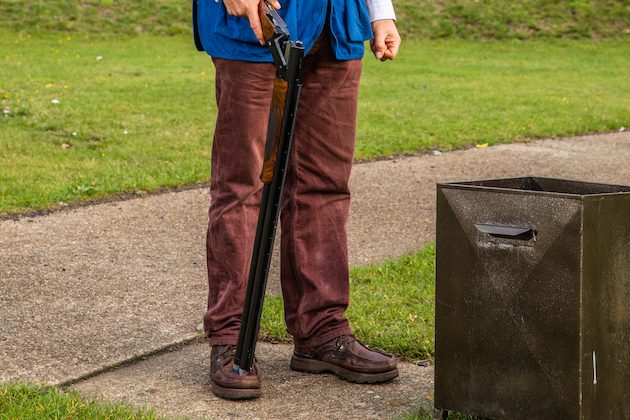 Your feet must be within the marked area

Technique is key. When trap shooting your feet must be within the marked area and should not restrict your body movement when shooting the target. Your gun should be pre-mounted with your head down on the stock, starting your gun on your pick-up point for that station. The movement to the target is done with core muscles in a smooth and progressive swing.

The current world champion in Olympic Trap is Matt Coward-Holley, 24, the first British shooter to win a world title in this discipline. Perhaps you could follow him?

Automatic ball trap (ABT) could be regarded as a “speeded up” version of down-the-line (DTL). The angles are greater and the clays a bit quicker.

For the gameshooter, most trap disciplines are ideal for building up the reflexes often needed for walked-up shooting – where game will be going away and may be rising.

The clays on an ABT layout vary quite considerably, some may require only a flick of the muzzle that are going away in front, but some left and right handers will require more rapid movement. Start with your gun up and try matching the speed of any angled clays, push through them and shoot – keep swinging for a follow up shot.

Q: I find shooting pairs from the same trap is impossible!

Before calling for the pair, create a mental picture of where the second bird will be once you’ve broken the first. This is important because its position after the shot has been taken will actually determine your initial address point.

If the pick up point changes between birds then there’s a fair chance the second bird will be missed.

The key is to always take the muzzles back to the exact same address point that you chose for the first shot. If you go back too far – or not far enough – your gun movement, sight picture and rhythm will change. The correct hold point is the one that gives you sufficient time to put the muzzles smoothly back in place, see the next target, move the gun and shoot it in the same place as you did the first.

Q: Should I buy a trap gun to start clayshooting? I’ve recently used a friend’s Beretta trap gun, which I like. Should I buy one like his? I  once managed to hit 14 ex 25 with it at DTL.

A:  It certainly helps to use a gun you feel happy with but before doing anything get your friend to take you to a club where you can try your hand at English Sporting and Skeet. The targets and the guns to shoot them with are a bit different to what you are used to and you might decide to shoot them in preference to the trap clays you have been popping off at so far.

It’s usually the case that people are introduced to clay shooting via Sporting and then branch into the more specialist trap disciplines later.

Q: Will a trap gun be ok for shooting sporting layouts?

A: An experienced, competent, shooter might manage to post reasonable Sporting scores with a gun like this but my advice to a novice like you would be to use it for the job intended of it and buy something more suitable for English Sporting.

Trap guns are specialised bits of kit designed to cope easily with rising, going away, targets – and this is achieved by fitting the action body with a stock and/or barrel assembly that places the shot pattern higher than that from a Sporter.

Trap guns also perform to their best when they are pre-mounted prior to the target being called for whereas the stock on a Sporting gun is shaped and designed to be brought to the face and shoulder after you call ‘pull’ and when the target comes into view.

Mounting the gun in this fashion not only creates useful momentum which helps deliver the forward allowance needed to break a moving clay pigeon but it also allows you to watch the bird without the barrels interfering with your view of it.

Unlike trap targets, those encountered on a Sporting shoot are presented at all sorts of speeds, distances and angles so the gun you use needs to be able to accommodate each and every one of them. This is best done with a gun that shoots to the point of aim – ie where you are looking.

Q: Why don’t people use semi-automatics for trap shooting? I can’t understand why they aren’t more popular, particularly as they impart less recoil to the shoulder.

A: Semi-automatics have never been popular in Britain or on the Continent for trap shooting, and I can’t ever see that changing.

With one or two notable exceptions there are few European gun makers producing semi-autos in trap configuration, instead their production is geared to guns for rough shooting, pigeon shooting, wildfowling and Sporting – a few of which sometimes find their way onto the skeet range.

There were certainly more semi-autos used in competitions during the 1960s and 70s but the better balance and reliability of the over-under took a grip, and it has never let go.

Yes, reduced recoil is a powerful incentive to use a semi-auto but the gun’s habit of ejecting spent shells in the direction of another shooter awaiting his turn has proved somewhat off-putting. Beretta has addressed that particular issue with the UGB 25Xcel in that empty cases now eject through the bottom of the receiver and fall directly to the floor.