A couple of deep baking trays and a cooling rack will create a pheasant smoker, a novel way of cooking the gamebird

Eating what you shoot is all part of the shooting code, so you need to have a few delicious pheasant recipes in your repertoire. Pheasant is also free-range and high in protein, nutritious and delicious.

And so it begins …

These days the top game chefs recommend hanging birds for a minimal time, as they taste best when very fresh. Gone are the days of hanging pheasant for days until they tasted ‘gamey’. Which is a good thing too, as that gamey taste probably put off a lot of diners who otherwise would have enjoyed a pheasant dish. Four days is the maximum to hang a pheasant safely in the feather in a cold place.

In fact, pheasant meat is mild, delicate and extremely versatile.

Shooting Times contributor and game chef Tim Maddams advises: “It is a good idea to leave them for 24 hours if you can, as this helps the meat to relax, but anything more than that is not needed, unless you prefer a deeper flavour to your meat.”

Pheasants that are wet, dirty or badly damaged should be prepared for cooking as soon as they have cooled from the field, because they will go off very quickly.

Certain dishes are best with a cock bird, other pheasant recipes work best if you have a hen bird, for example if you’re going to roast a pheasant.

Think about the time of year

How would you go about getting the best from older pheasants? Tim Maddams advises: “There are lots of things to remember when cooking older birds. For the most part, you will be able to rely on your usual late-January pheasant recipes. First, the meat will be tougher, so the birds will take a little longer to hang. This will aid the toughness issue, but also deepen the already stronger flavour, so you need to balance that one.

“Because of that stronger flavour, I’d advise you to use the meat from older birds in spiced dishes. I’d add some allspice, bay leaves and brown sugar to a brine and leave the birds to marinate for a couple of hours. Then remember to cook the birds low and slow for at least a couple of hours and it should be awesome. If you are breasting and leg-boning the birds, the bones will make an excellent stock. The meat is ideal for mincing, so think about ragu and meatballs. The breast meat will be excellent for hot-smoking as well. ”

There are plenty of useful videos around on plucking and gutting pheasants. You will make a bit of a mess, so do it outside if possible. You can also bone the bird without plucking it. Some people also swear by pheasant crowners.

There are a few things to bear in mind when plucking pheasants. On the breasts, in particular, you should be careful to hold the skin down while you gently pull the feathers, no more than a few at a time, against the grain.

You will have difficulty if the bird has many shot holes in the breast, in which case you would be better of skinning it anyway.

However there is little point in plucking a late-season cock for roasting because it will be rather tough – it would be better to breast the bird and fry some pheasant goujons instead.

You can add pheasant meat instead of chicken to almost any recipe – or add it to a chicken recipe to give a deeper flavour.

Smoked pheasant is another thing to do with the meat – and then you can use it as a basis for salads.

A criticism levelled at pheasant is that it can sometimes be a dry meat – this tends to happen with older birds which should be cooked long and slow and never roasted.

Shooting Times contributor Rose Prince says about pheasant: “I also love to use it in more exotic recipes,  as a reminder of the bird’s Eastern origins”

Some dishes to cook with pheasant

Pheasant has been enjoyed for hundreds of years. Fancy cooking a pheasant recipe with a difference? Try cooking it in hay. 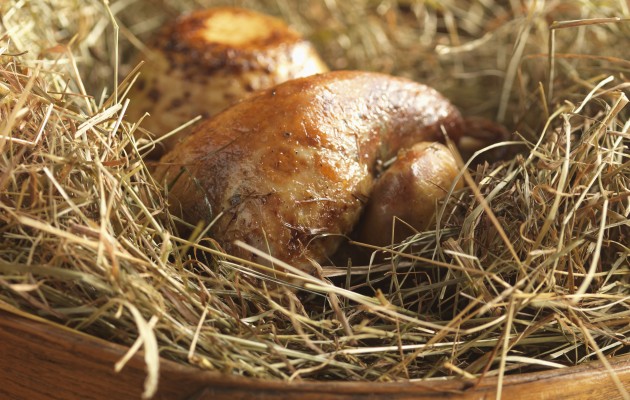 Baking in hay is an old method: the hay will keep the heat in during cooking. Serves four.

Sear the pheasant and celeriac in a hot pan and season well.

Soak the hay in cider. Place the hay in a roasting tray and nestle the pheasant and celeriac inside and cover.

Remove from the oven and allow to rest for 20 minutes before serving.

Remember the pheasant will carry on cooking with the residual heat.

At the time of making this recipe, we had no idea what was coming for the people of Ukraine. In line with many others, we have changed the name of…

I love a Scotch pie… the cheeky design of thinly rolled hot-water-crust pastry, always on the edge of being a bit too tough, specifically so that the meaty treat can…

I’m not preparing a foodie delicacy, just an easy fried pheasant burger. I used cheap burger buns and crispy little gems from a bargain supermarket, along with its own-brand mayonnaise…

Since moving to sunny Scotland last year, all things haggis have been on my radar so here is my recipe for pheasant haggis. While it is by no means a…

This recipe for pheasant escallop is a winner with my friends. It is super-simple and really quick to make. At this time of year, young pheasants make excellent eating and…

Pies are such a good invention. They are perfect comfort food on a dark winter evening. They are also superbly portable – so you can take a slice out for…

I ate a version of this pheasant supper recipe not long before Christmas last year, in what seemed like a brief outbreak of unlocked freedom. The venue was the Fox…

The principle of making the most of what you’ve got was never absent from our great-grandmothers’ kitchens. Yet today commercial poultry is rarely sold with the giblets, head or feet…

I have always cooked some nice Caribbean foods, but jerk chicken, rice and peas is one of my top meals. This got me thinking about a Jamaican jerk pheasant recipe.…

The true history of the chicken Kiev. It is likely that it came into its recognisable form when French chefs were employed by very wealthy Russians in their kitchens in…

I have avoided boning chickens or similar for years, thinking it was a fiddle. I was unable to decide if it was a distinct improvement, save for the fact that…

If you have never attempted plucking a pheasant before, let me suggest that you start outdoors. You’ll want a chair for the purpose, and a bin liner for the feathers…

One of the old rules of cookery is that rich indulgence requires long, slow cooking, hours of painstaking care and attention, and a bottle of red. This recipe for pheasant…

Earlier on in the season roast pheasant is the best way to cook a young bird. The meat is tender and roasting it will bring out the flavour. Later on…

This delicious game risotto recipe blends rabbit and pheasant meat together. Don’t use ordinary rice – it won’t work. You really need to have risotto rice, but it’s easy to…

We’ve put together these essential pheasant breasts recipes which every shooter should know. When you’re cooking pheasant you need to ensure that it doesn’t dry out – so don’t overcook…

Reader and keen Shot Dominic Russell had a problem. His wife said she wasn’t a fan of game. Refusing to believe this he decided to create a game dish that…

Risotto recipes are the perfect way to use game meat. This simple to make and delicious recipe for pheasant risotto with mushrooms was developed for us by the West London…