The .22 Magnum was a larger version of the venerable .22LR case to give it increased performance.

It was originally chambered in the Winchester Model 61 pump-action rifle, but today it has become eclipsed by the smaller and faster .17HMR round even though manufacturers produce .22WMR rifles.

Usually the .22WMR shoots a 40-gr bullet, which is capable of 1,900fps, and so sits nicely in ballistic terms between the .22LR and .22 Hornet cartridges.

But with the advent of some newer and lighter-weight bullets of 30-gr – in particular, the 30-gr V-Max from Hornady – the old .22WMR is not dead yet.

It can also use 50-gr bullets. Some believe that the .17HMR is marginal on foxes.

This makes the .22WMR’s extra weight and energy at longer range seem appealing and similarly effective on small vermin, particularly where a .22LR is just not quite powerful enough.

Ballistics-wise, there is an increase of 1,250fps to 1,800fps for a comparable 40-gr between a .22LR and .22WMR round – .22LR ballistics can only reach these sorts of velocities by having a lighter bullet weight.

This not only flattens the trajectory for longer range but also increases ft/lb energy for assured kills at shorter ranges, especially on larger game such as foxes.

The .22WMR offers a short-range light fox gun for those who only have limited land to shoot over or who do not want to reload centrefire ammunition. 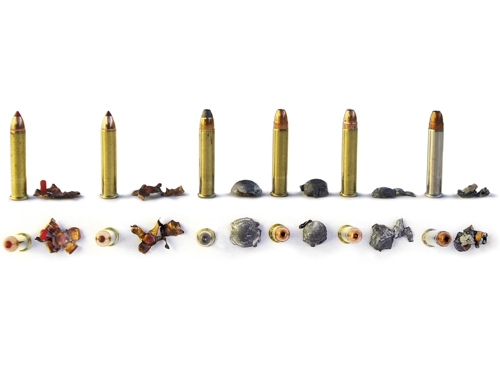 The newer .22WMR rounds are better made than the previous batches I have tested over the years. The accuracy of a .22 Magnum rifle was only as good as the ammunition that it was fed.

Thankfully, there is a better choice now, so shooters can find a bullet type and brand that suits their needs.

RANGE TESTS
I used a Ruger 77/22 Magnum rifle to test 10 different .22WMR types. The gun had a shortened 14in barrel, so when a sound moderator was fitted the overall length was not too long. The Remington 40-gr bullet is good for shooting rabbits because it causes the least meat damage.

I tested for accuracy at 50 yards because the .22 Magnum is not as accurate out to 100 yards as the .17HMR. But when a bullet proved accurate in the Ruger, I shot some 100-yard groups just to see.

I tested six bullets this way because only six .22 Magnums showed sufficiently good accuracy and were worth pursuing further.

I chose the six best to conduct the penetration tests. These were the RWS, CCI Maxi-Mag HP+P, Federal JHP, Remington, Hornady V-Max and Hornady NTX loads.

That’s not to say the others are bad; they just did not shoot so well in the test rifle.

The RWS was most accurate – at 50 yards, five shots consistently gave 0.85in groups and penetrated an impressive 9.5in into the ballistic material.

The bullet expanded to 0.4640in and retained 36.2 grains of its initial 40-gr weight, which is impressive.

It also produced the second largest wound channel volume (810ml), so this was an all-round accurate performer.

Next up was the CCI Maxi-Mag HP+P.

This bullet is the same as the Maxi-Mag HP but is loaded to a higher pressure (hence +P), weighs less and travels faster.

Accuracy was fine at 1in or so at 50 yards. Because it is a light bullet it penetrated just 5.25in before it disintegrated. It produced the largest wound volume on test at a whopping 894ml, so this is a good, close-range feathered vermin round.

The Federal JHP load was different because it utilised the heaviest bullet on test at 50-gr and produced solid 1in groups at the 50-yard mark.

As expected, the extra momentum from the 50-gr bullet penetrated the farthest at 10.75in, retained 37-gr of its weight and expanded to 0.3825in.

It also produced a serious wound channel (752ml). This bullet would be my choice as a fox load.

The Remington was a dark horse. It shot nice concentric inch groups.

Despite a sedate 1,845fps velocity, it penetrated 7in and retained 24.5-gr of its weight.

It also expanded predictably to give a 0.4185 bullet diameter but the smallest wound volume (514ml).

This bullet has a good balance between penetration and non-meat damage, which might be useful on hares, for example.

The last two offerings were from Hornady. The V-Max has been a game-changer because it is a good performer and usually shoots true.

Because it is a light bullet that travels fast, it penetrated the least at 4.75in but it produced a large wound channel (797ml).

Just 7.4-gr of the bullet weight was recovered and the base expanded to 0.6905in.

I was expecting similar results with the NTX (non-toxic) bullets but these proved less expansive than the V-Maxes despite being the lightest bullet tested at 25-gr. 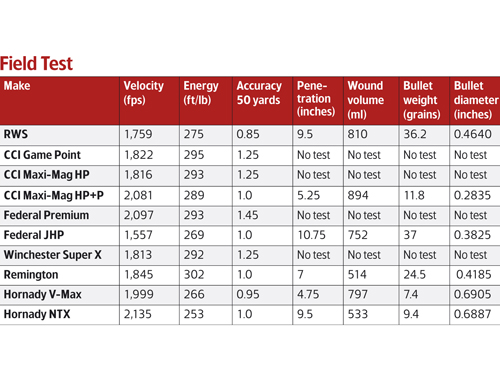 It screamed along at 2,135fps, produced 1in groups and penetrated an impressive 9.5in. Its core/base stayed intact and retained 9.4-gr weight and expanded to 0.6887in.

It also produced a less violent wound channel (533ml) than many of the others tested.

I feel sorry for the .22 Magnum. It is a good round, but the .17 HMR is much better in terms of accuracy than its bigger brother.

Sako’s Quad rifle offers a quick-change barrel and, as such, with a .22LR, .22 Mag and a .17HMR barrel you would have a perfect vermin outfit.

Or you could have a spare barrel for the Ruger, because it comes off easily from the action.

The results show there is something for everyone, be that a flat-shooting load, such as the NTX, or a great penetrator, such as the RWS and Federal JHP rounds.

If you want minimal penetration and instant explosive effects, then the CCI Maxi-Mag HP+P or Hornady V-Max bullets are ideal.

You can often pick up .22 Magnum rifles cheaply that have had very little use.

Yes, ammunition can be expensive and each rifle can be fickle in terms of the ammunition it works best with, but it’s still worth it if you want a hard-hitting rimfire rifle for vermin.

The RWS was most accurate