£259.00
TAGS: Guns for pest control
This product is featured in: Up to what range are my .22 bullets still effective?.

Everybody needs a rimfire in their lives, be it for centrefire practice or, more commonly, for pest control.

There are many new types to choose from and also good value second-hand kit on the market.

We all like a bargain, and the Puma rimfire from Highland Outdoors is one such item.

Closely modelled on the Brno and CZ bolt rifles, the Puma comes in either a wood-stocked or synthetic sporting version. 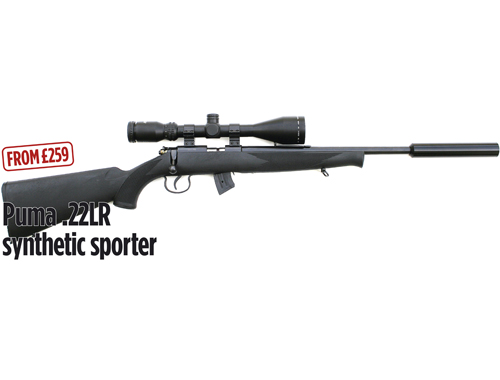 This is a great price to get you started with everything you need for pest control.

I tried the 16in shortened version — the standard length is 20in — with synthetic stock and the Hogan moderator fitted but no scope.

This makes it a compact vermin tool.

This is essentially a CZ clone, which means it is a scaled down Mauser design action and bolt assembly.

Its tubular all-steel receiver has an integral dovetail for scope mounting, with the bolt proportioned to give a small yet fast and reliable rimfire action to operate.

When the action is cocked, a small protrusion from the bolt shroud indicates you are ready to fire.

The bolt is polished bright and has the usual twin-extractor claw arrangement with a blade ejector attached that is simple yet works well and is suitably robust. 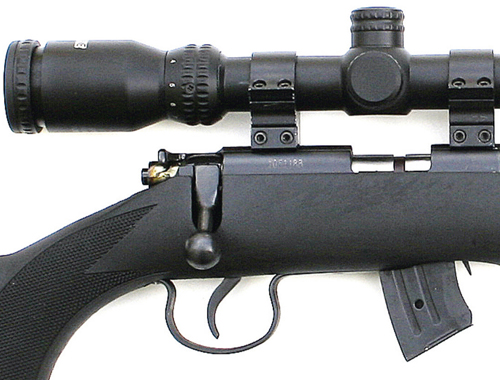 The overall finish is a dull/matt blued finish, which feels a bit “dry”, but a good lube soon sorted out the operation of the bolt, though the firing cycle or lock time was a bit sluggish.

I preferred the 16in barrel over the standard 20in version. It is screw-cut for a moderator with inch United Fine Thread (UNF) pitch and is supplied with a thread protector.

This rifle had the foresight removed by the owner, but most people would fit a scope to the receiver.

An air rifle is particularly suited for killing rats. With sensible use of backstops — most often concrete walls in…

I set up some targets at 30 yards and shot off a BR Pivot shooting bench and used a Chrony Alpha Chronograph to record the results.

This Puma came with a Hogan DecimEater sound moderator, which was superbly quiet with all the subsonic ammunition tested. I had no feeding problems, but the bolt was a bit stiff though it eased up with use.

All subs shot fine, with the RWS and Winchester both shooting 0.75-1.0in groups for five shots at 30 yards.

The Eleys shot best and gave good consistent 0.5in groups with a mean velocity of 1,012fps for 91ft/lb energy.

I found that the reduced load CB Long, shooting a light 29-gr bullet at 741fps and 35ft/lb energy, was like shooting an FAC rated air rifle.

With restricted ranges, these are great for ferals and rats around barns. I also tried some high-velocity rounds and their accuracy was random. This Puma did not like Remington Cyclones or CCI Velocitors but it did like the Federal 31-gr rounds, producing 1,358fps and 127ft/lb with 1.0in groups.

Best high-velocity rounds were the RWS HVs at 1,220fps, yielding 132ft/lb of energy, which gave 0.65in groups at 30 yards, making it a good longer-range rimfire round.

The trigger is a two-stage type with slender trigger-blade. Despite the small amount of creep to the let-off, the trigger weight broke at 4lb. I would work at it a bit to refine the triggerpull.

Safety-wise, the bolt shroud safety is pretty straightforward — you push the top lever to engage the safety. This is tactile and positive — no problems here. The magazine is all steel in construction and comes standard with a five-cartridge capacity.

Both fit within the pressed steel trigger-guard.

A small catch in front of the magazine is depressed and the magazine pops out. I had no problems at all in feeding.

The nicest part of the Puma .22LR is the stock design. It is a hard plastic so it feels a bit cheap, but despite being hollow it is hard-wearing and actually what you want on a sporting arm.

The stock is a matt grey/black with a textured finish and has a nice style to it, with Schnabel fore-end but low comb and no cheekpiece.

There is pressed-in chequering to the fore-end and pistol grip for extra grip, but the butt-pad is a slim, hard plastic plate, so it is a bit slippery in the shoulder.

There are also sling loops attached to the stock but not of the quick detach type.

Despite a few shortfalls, the stock is practical and feels good when shooting. 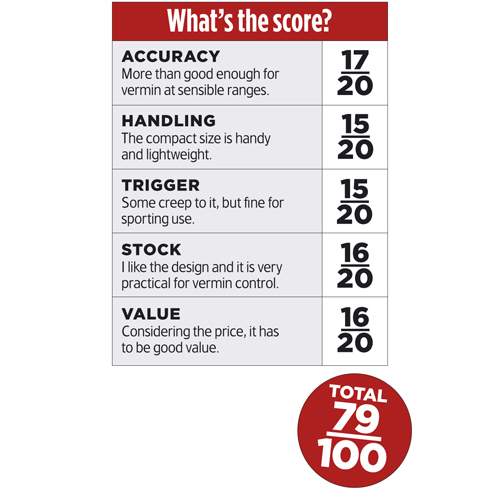 Despite being a copy and a bit rough around the edges, the Puma shoots well. I had no problems with accuracy at all — the Eleys shot nicely.

The trigger is fine and the stock is well proportioned and perfect for rough use around the farm.

The Hogan DecimEater is outstanding as a rimfire moderator, and if I were to buy this rifle, I would go for the complete kit.

Would you buy a Puma instead of a Brno or CZ that it emulates?