Second-hand rifle buying guide
TAGS: Buying guns second-hand
This product is featured in: 20 of the best shotguns for under £1000, Barrett Fieldcraft Sporter rifle, What you need to know about buying a gun second-hand, and What’s a good second-hand rifle for deer stalking?.

Obviously, you need to consider issues such as safety and your budget, but perhaps the most important thing to remember is never to be in a hurry or seduced by a bargain.

Aim first to gather as much information as possible about the gun and its former owners.

Remember that once you’ve made your purchase and it has been entered on your firearms certificate, it won’t be all that easy to remove it should you need to change the gun.

To find out how much use the gun has had, bear in mind that professionals such as gamekeepers and Forestry Commission stalkers frequently use their rifles, but a once-a-season stag stalker’s rifle is more likely to be in mint condition.

There are plenty of good second-hand rifles out there from people who have had little use of them and just want a change.

On the issue of safety, it is often better to buy from a reputable dealer who should make sure the rifle has been checked over.

It’s important to set and stick to a budget, remembering that you have to buy a scope (and a sound moderator is useful too).

£350 can buy you a serviceable stalking rifle and with a bit of research you can get a whole outfit for no more than £500.

Here, it might be better to go online and look at gun trading sites for prices, as a sweet-talking gunsmith might part you from your cash all too easily.

If you prefer to go to a gunsmith, carry out the following checks, as they will show that you know a little about rifles — and you will be less likely to be sold a pup.

BARREL
Don’t be fooled by the external finish as it’s the quality of the interior that is paramount to performance.

It’s amazing how many people can ruin a new rifle by neglecting to clean the barrel, yet old rifles owned by enthusiasts can have immaculate bores. 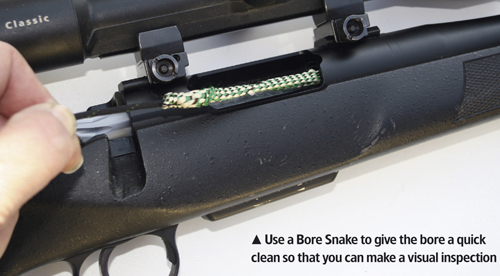 First, remove the bolt for safety and take an initial look from the chamber end and then from the muzzle end, holding the barrel against a light source or a purpose-made bore light.

If the barrel looks dull and full of dirt the gunsmith or previous owner has not looked at it, so that’s the first indication that the rifle might be suspect. Ask to use a simple pull-through to clean the bore — a Bore Snake is now common at all gunsmiths (if they say no, politely walk away).

Look closely at the chamber for any scratches, rings around the circumference, or gouges — these are all bad news and are usually caused by damage from cleaning rods without bore guides or poor reloads and neglect. Next, look at the throat of the barrel where the rifling begins.

If the rifling lands look very shallow or irregular the barrel has had lots of rounds through it — another reason to be cautious.

Check again for any roughness, dark spots or raised areas and pits along the length of the bore, an indication that any fouling after shooting has not been cleaned and therefore corrosion has started. It is also important to look closely at the muzzle end to check there are no nicks, scratches, gouges or dents around the muzzle that touch the rifling as it exits the bore.

If there are, this will affect the bullet’s flight as it exits
and cause inaccuracies.

TRIGGER/SAFETY
It’s amazing how people can bodge a trigger or adjust it to be too light, making it dangerous to use.

Cock an empty rifle, then knock the butt hard to see if the sear disengages, which means the trigger is far too light.

Though dry-firing a bolt action is discouraged, as there is no resistance as the firing pin falls, if you do not have snap caps to hand one or two trigger pulls will have to be taken. 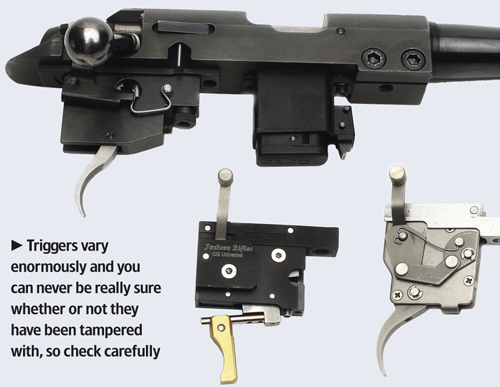 Look out for excessively heavy or very light trigger pull weights, and also pay attention to the travel and if they pull without creep or roughness.

If you’re unhappy, ask the gunsmith to adjust it before you buy.

When it comes to safeties, check for a smooth, distinct operation and make sure the rifle does not fire.

It’s obvious, but I have bought, by mistake, rifles with poor or defective safeties that were costly to repair.

ACTION/BOLT OPERATION
Visible signs of rounded screws for attaching the action or scope are clear signs of misuse and you have to ask yourself why has the action been taken out of the stock so many times?

A worn blued finish to the action is not necessarily a bad thing, though rust and deep scratches are.

What you do not want is any binding when operating the bolt, as this indicates that the bolt might have been dropped and damaged.

Check that the locking lugs locate correctly by looking for even wear marks at the rear of the lugs, which mean that the action locks concentrically. Ensure the bolt face does not have too much brass from the rear of the cartridge on it.

This can be a headspace issue, also due to neglect.

STOCK
This is a crucial part of any rifle, both for handling and to support the action while operating and firing.

A sloppy action-to-stock fit or barrel rubbing on a warped stock can lead to inaccuracy.

External scratches and dents are usually only cosmetic and should not cause real alarm but can be used as a bargaining point to lower the price. Check for obvious signs of cracks or repairs around the magazine well area, fore-end tips and pistol grip, where you rest your thumb.

If you can, hold the stock against a hard surface and try to flex the fore-end to see if any cracks or hairlines open up.

It’s hard to see inside the stock and impractical to take the action out, but look for rust accumulation around the borders of wood and metal.

If there is some form of artificial bedding all the better as this forms a glove-like fit between action metal and wood or synthetic stock to ensure the action is supported rigidly when fired.

If there is no bedding try to get a fingernail in between the metal and wood to see if it is still hard.

If your nail goes in easily it could be that oil has seeped in and made it spongy — not a good thing. A synthetic stock is not impervious to abuse either.

I have seen plenty of cracked, split and warped “plastic” stocks, so treat the inspection as you would a wood version.

MAGAZINE
It doesn’t matter whether the floorplate is detachable or fixed hinged, as both can get damaged in use.

Common factors are that the cartridge follower rides smoothly whether in the magazine or the magazine well housing.

Pop open a hinged floorplate to check that the spring is not damaged or modified in any way and that the retaining catch is strong enough to retain the floorplate and is not loose.

On detachables, look carefully for dents in metal or cracks in plastic — these can cause cartridges not to feed correctly.

It is not safe or practical to feed rounds through the gun but if it is a common calibre many gunsmiths have rifle snap caps that can be used to see how the rifle actually functions.

They could save you an expensive repair job.