A while ago I tested the then new Boxall & Edmiston (B&E) scrollback side-by-side boxlock.

At the time I concluded this was a bold enterprise linking the latest technology with 19th century gunmaking values.

Since then, B&E has extended its range to include both round and square-bodied over-unders, the latter with the option of sideplates.

This is very much under the guidance of Peter Boxall, who has the advantage of having worked at the top end of the trade for W & C Scott and Holland & Holland.

Having visited the company manufactory recently, I realised that these guns are a team effort. everyone I met was incredibly enthusiastic about the guns.

The balance point is right on the fore-end knuckle, meaning it is almost evenly balanced between the hands. This results in a gun that is quick and effortless to point and mount, making it a true game gun.

It also sits nicely in the hands, with the slim fore-end and what B&E calls the pommel grip (with the regional differences in the gun trade, I know it as a bag grip).

There are other options, including a true Prince of Wales grip, which is similar but flat at the bottom and with a more tapered shape.

Everything on this gun is bespoke. A bespoke stock in the much sought-after red-brown walnut with dark shadows of veining running through it. Chequering is in the classic neat and restrained English style, but a more lavish Continental pattern is also an option.

DECORATION
One of the more eye-catching features of any gun is the decoration.

While I greatly admire the tiny hand engraving that was common a century ago, I do like a bolder type, of which this gun has plenty.

It features the house-style No. 3 laser engraving, a strong foliate pattern, with the name in relief on the bolster (a word that has descended from the bolster that carries the nipple on a percussion muzzle-loader) and a matted background. The name also appears on the slim top rib with the address, Shrewsbury,  England, something that the makers seem particularly proud of!

For a round action gun, all the lines are right. It has the added attraction of a scrollback action body with neatly proportioned fences and attractive extensions of the fore-end iron.

I always find the Deeley catch in the fore-end a pleasing feature and this one is positively located on the end of the fore-end stale, technically, a good idea.

THE WORKINGS
From a gunsmith’s point of view, the lockwork and design details are of special interest.

Three aspects I like are the large, durable-looking strikers (firing pins), the high bites and the location of the V mainsprings. 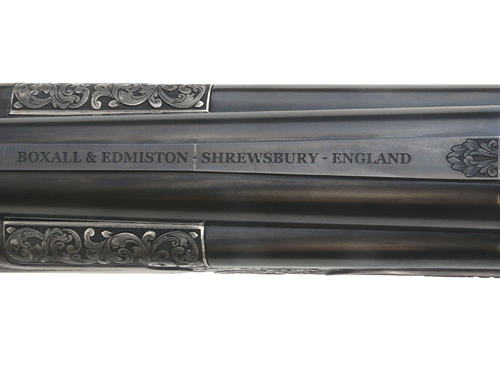 The latter sit at the bottom of the action, bearing directly up on to the hammer.

This is a good layout that allows for a decent size and length of spring.

The bites, with which the locking bolt engages, are located towards the top of the bottom barrel, about as high as is practicable without encroaching on the extractors, which, coupled with trunions (or hinge discs) and a good lock-up with the side lumps, makes for a strong but light action.

Otherwise, the general assembly is what one expects to find on a modified trigger-plate design.

Sears hang from the top strap and there is inertia operation for second barrel selection, but a nice practical and traditional touch is a V spring for the top lever. The sprung extractors work on a similar principle to that time-proven design used by Beretta, while the barrels are assembled on the monobloc principle.

The jointing between monobloc and barrels is superb and a good example of accurately machined components meeting with the gunmaker?s art.

Forcing cones follow the modern trend in being fairly long and, as standard, chokes are quarter and three-quarters, with the option of the customer?s own choice of fixed choke or Teague chokes.

TESTING
This is one of those lightweight guns that handles heavier loads without unpleasant recoil.

Even 34g loads fired in quick succession do not dispel the impression that, for most forms of shooting, this would always be a sweet gun to use. Part of this comes down to attention to tight tolerances in manufacture, especially on headspace (the gap between the head of the cartridge and the standing breech).

The stock on the gun I tested was not quite my fit, although it is a good shape and in any case, a bespoke stock is included in the price.

When patterning, point of aim is with the foresight bead just on the centre of the target; then it throws the shot about two-thirds above centre and a third below, which, for most forms of shooting, is about right.

If I had to pick the two I most favoured for this particular gun it would be the Eley Grand Prix for game and the Hull Sovereign for clays, but it was a close-run thing and comes down to personal choice.

Cartridge case ejection is sufficient without the sharpness associated with many over-unders.

Trigger-pulls are suitably short and crisp, both set at 3.5lb, while the safety button/ barrel selector has a precise movement. CONCLUSION
The method of manufacture of this gun is in line with many of the best gunmakers.

It is a blend of ultra-modern technology with the essential handwork that makes all the difference between a gun with its own innate character and a standard factory product.