William Evans worked for both Purdey and Holland & Holland, as well as, prior to the latter’s change of name, H. J. Holland.

From 1883, when it set up in business, to the present day, William Evans has survived as an independent company, which is no mean feat when you consider how many competitors have fallen by the wayside over the years.

Like many makers, William Evans subcontracts work — either in the form of part-finished or complete guns — to satisfy demand.

The pair of Connaught 12-bores that were on test were no exception, having been made to Evans’ specification by the well-respected firm of Grulla Armas in Spain.

FIRST IMPRESSIONS
My first impressions were of a handsome pair of guns housed in a desirable and substantial leather and wood double guncase, which is thoughtfully provided with a zip-up canvas protective outer cover.

Once assembled, the guns are almost indistinguishable, apart from their sequential serial numbers and the gold inlaid “1” and “2” on the top levers and ribs. 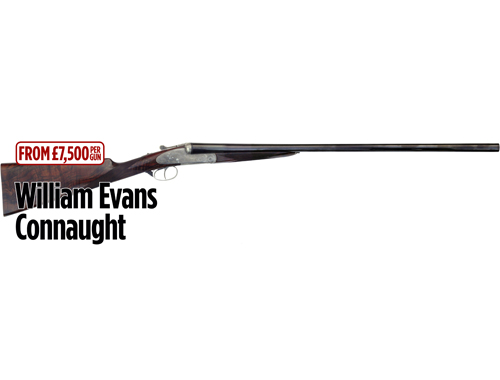 The stock wood is from a pair of blanks, though gun 1 was my favourite, having the slight edge with its beautiful wood.

Not only do the two guns look identical, but they handle the same too, as a true pair should, and if you close your eyes you can feel no discernible difference.

As for mounting, they took a bit of getting used to because of the long, 15.3⁄4in length of pull from the front trigger.

This is not a criticism — the guns belong to a customer of William Evans who kindly loaned them for the purpose of this review, and they are stocked to suit his requirements.

If anything, this emphasises the lengths (no pun intended) that William Evans is prepared to go to in order to achieve a bespoke fit. 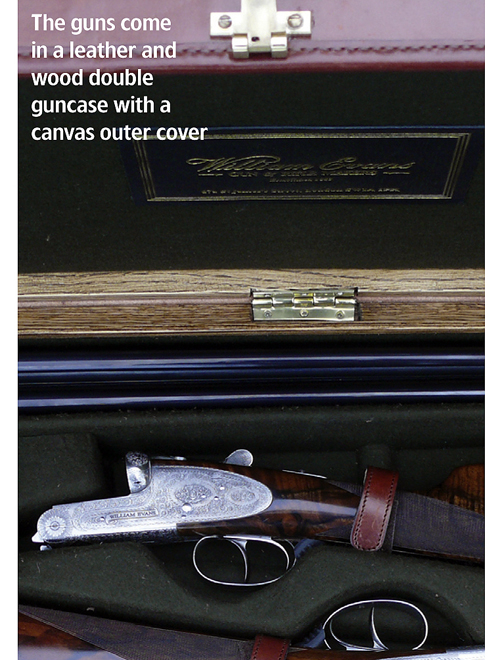 What is noticeable in this respect is the reasonable amount of castoff (for right-handed use) and the shallow curve across the side of the stock next to the user’s face, running up to the comb, which increases comfort under recoil.

GLORIOUS WOOD
The glorious walnut used (an optional upgrade on this pair) is enhanced greatly by the traditional oil finish.

A riot of dark veining, autumnal colours and fiddleback, I can’t imagine a better finish.

The fitting of the wood and the metal is good and the rounded styling at the head of the stock, without a panel around the locks, produces nice clean lines.

William Evans is especially proud of the chequering on these guns — a fine 24 lines per inch, which is about the practical limit to satisfy its primary function: providing a good grip.

CLEAN BARRELS
The barrels are struck up (finished) cleanly and are well blacked, while the bores are also flawless.

These two guns are chambered for 76mm (3in) cartridges and fitted with Briley thin wall chokes, but the choice is very much down to the customer, and fixed chokes are the standard option.

However, each tube is marked along its side with the relevant details, though I found the information provided a bit confusing, so I resorted to using the gunsmith’s method of direct measurement. 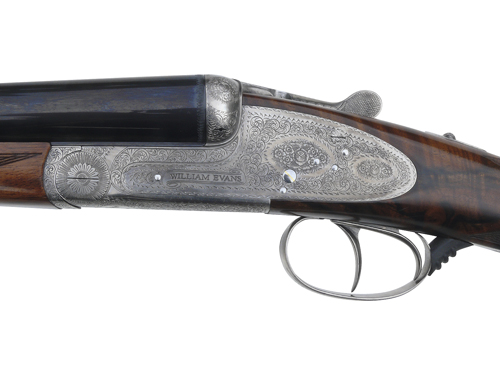 The Briley choke keys are well made and comfortable to use, and one of the benefits of having two sets of chokes must be the other variations one can make up, such as full-and-full, half-and-half, and so on.

CLASSIC SIDELOCK
The lockwork is the classic sidelock, an evolution of design that has stood the test of time and is generally regarded as the ultimate ideal.

Five pin locks, disc set strikers (the disc holds the striker or firing pin in place) and gas vents (which also serve to lock the disc in place), are all features that you would expect on a good gun.

The gas vents were originally a safety device for the event of a ruptured primer, and though that is a rare occurrence nowadays, they have remained as one of those pleasing little features we have come to expect. A rolled edge to the right side of the triggerguard — usually known in the UK gun trade as a “single bead” — adds a pleasing bit of style, but I felt that the finger protector at the rear of the trigger-guard was unnecessary.

Still, like the articulated front trigger, it is a matter of choice, and some shooters find the addition of such a feature appealing.

As for the bouquet and scroll engraving, it follows a traditional pattern that one could even find on William Evans’ guns built around a century ago.

TESTING
At 7lb, with 30in barrels and long stock dimensions, this was never going to be a pair of fast-handling partridge guns, but they proved more deliberate in use, potentially making good high-bird guns.

There are plenty of options for other forms of shooting, with barrel lengths ranging from 25in, and a choice of smaller gauges, including 16-bore and 28-bore.

The trigger-pulls matched well, being crisp and clean, while the ejection of spent cases was positive.

This was due to the strong ejector springs, and was especially noticeable when recocking them on closing the gun after firing.

The point of aim on the pattern sheet was with the bead just on the target centre to throw an evenly distributed pattern. 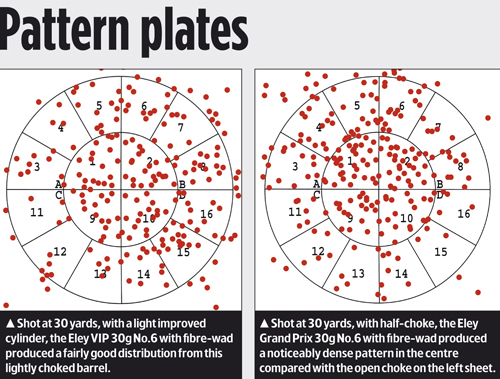 The Briley chokes proved a bit sensitive to the cartridges used, though the Eley VIP and Grand Prix gave similar results, matched fairly well by the Hull Imperial Game.

The Express Super Game proved its worth when using the tighter chokes, and the Fiocchi FL30 was at its best with more than half-choke. CONCLUSION
The Connaught range of guns provides something for almost every aspect of sport and, being bespoke guns, there is a variety of additional options to choose from — the most important being the correct fit for the user.

It is normal practice in the gunmaking industry to charge more than twice the price of one gun for a pair, due to the extra work involved in matching two guns, but William Evans’ approach is to price a pair at just the cost of two single guns.

In real terms, this means the second gun is effectively obtained at a slight discount.

The gun’s name is to commemorate the fact that one of William Evans’ famous regular customers in the past was HRH the Duke of Connaught.