Gun reviews: Remington Versa Max 12-bore semi-auto
It seems a little odd when you think that the American semi-automatic shotgun has been with us for about the same length of time that British gunmakers have been producing the breech loading over-and-under shotgun.

Yet, while the over-under has evolved into several fairly standardised designs, the semi-auto over the same period has undergone some fundamental changes, starting with the old “long” recoil system. 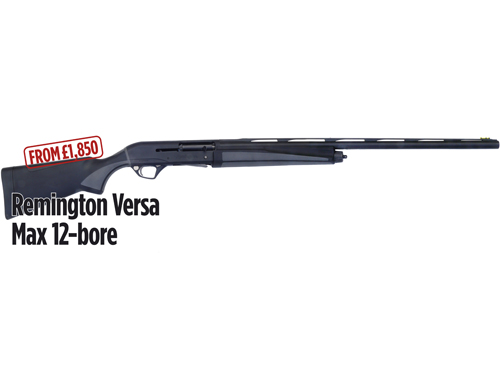 Both gas and inertia operation have also been favoured at different times.

So, how many changes can you get on a basic design?

Well, the Remington Versa Max turns out to be another variant — and quite intriguing it is, too.

FIRST IMPRESSIONS
The shotgun is thoughtfully provided with a comprehensive kit of parts.

This includes five choke tubes (one fitted in the gun), stock spacers and cast plates, trigger lock and a hinged box with essential tools.

There is the usual owner’s manual and a 10-year guarantee.

Once assembled, the Versa Max displays in the main a slightly angular, modernistic style that seems much in vogue at present with this type of shotgun. Only the receiver retains the familiar Remington look, but realistically there is only so much you can do with this main component part.

The gun is the basic matt black model, though two styles of camouflage are also available.

The contrasting soft grip panels provide a good, comfortable, warm feel compared with the rest of the synthetic stock.

The butt-stock gives a slightly hollow sound when tapped but otherwise gives the impression of solid construction, while the butt pad is large and remarkably soft.

A moulded-in sling-swivel fitting a few inches from the toe of the butt, and another on the magazine cap, allow for carrying with a sling, which may be of interest to both wildfowlers and vermin shooters.

In the handling department, it at first seems rather deliberate to use, but with a receiver length of around 9in and a 28in barrel, that is a lot of gun out in front. The leggy feel is certainly not due to the standard length of pull at 14.25in, which is fairly normal for a semiauto.

However, this can be altered by using the stock spacers provided and changing the cast, so that a personalised gun fit can be achieved.

SIMPLE AND VERSATILE
Weight is always a contributory factor in gun handling and even with the synthetic stock and aluminium alloy receiver, the Versa Max weighs in at just under 8lb unloaded — it is a gun of some substance.

On occasion, recoil will need a bit of taming and this is where some weight will help.

The Versa Max achieves this versatility and reliability of function over a large range of cartridges by using a delightfully simple gas bleed system.

Gone is the gas bleed at around 9in up the barrel and the associated large piston and linkage long associated with Remington’s design.

In its place is a pair of small pistons of short travel bearing directly on the breechblock mechanism. The gas bleed-off is just at the front of the chamber.

The length of cartridge, and therefore power generated, determine how many gas bleed holes come into play.

It is a wonderfully neat and tidy system and not only reduces the number of component parts but also overcomes the problem of inertia in the older system, which sometimes lead to variable reliability with some cartridge loads.

The pistons are designed so that old crusted powder fouling should have little effect, even if the gun suffers a certain lack of maintenance.

However, maintenance is very much in order with any sort of semi-automatic machinery and this is dealt with in the instruction book.

A hexagon wrench is provided in the tool kit and it is only a few minutes’ work to take out, clean and replace the twin pistons.

FAMILIAR ASPECTS
The rest of the gun is, in the main, comfortably familiar. The trigger assembly can be dropped out for cleaning by removing just one crosspin and the trigger safety has a satisfying large head.

When the bolt moves forward into the locked position, the separate bolt head semi-rotates to engage in a cut-out in the barrel extension; a modification on the old vertical lug locking.

As with older Remington designs, the return spring for the bolt is housed in a tube that projects back into the butt with a hinged link between the spring follower and bolt body.

One point to note is this: if the bolt is accidentally let forward too far with the barrel removed, the link may disengage from the spring follower, with a tendency then to jam the bolt in the forward position.

The remedy is to ease it fully forward with the receiver vertical.

The link assembly can then be seen to swing back in line with the follower.

TESTING
The first test was to prove Remington’s claim regarding the versatility of the Versa Max and this meant shooting it with a wide variety of cartridges.

Shot loads in the short cartridges varied from 26g to 32g and up to 46g in some of the larger lengths.

The Versa Max consumed old and new stock without missing a beat.

As fast as one could squeeze the trigger, it fired and ejected with amazing efficiency the various loads and cartridge lengths that mixed in no particular order.

Trigger pull, like most semi-automatics, proved somewhat long, but most noticeable was recoil with the big loads, which I felt was due to the gun bouncing on the soft butt pad, sometimes to slap against one’s cheek.

Patterns on the whole were quite tidy, with a tendency to be more open than the marking on the choke tubes indicated. It is both simple and efficient. Its ability to handle a wide variety of cartridge makes, loads and lengths is truly impressive.

The facility to adjust the stock to achieve a personalised fit is useful when using heavy loads.

As a semi-automatic, it is always going to be a utility tool suited for rugged conditions or a no-nonsense clay buster, but that is exactly what some shooters require of a gun.