William Powell
TAGS: 16 bore shotguns
This product is featured in: 16-bore shotguns under £10,000.

There is little logic to trends; they are blind, unthinking and emotion-based, often ignoring facts.

How else can one explain the general lack of enthusiasm for the 16-bore gun, which, for many forms of game shooting, actually has a lot going for it?

It is a little lighter than a 12-bore, but with game loads it carries just as much “punch”. A number of older shooters I know changed to the slightly smaller gauge later in life because it was less of a heavy load to carry across the fields but did the same job.

Also, at a time when many 12-bore users have moved towards lighter shot loads, the 16-bore is in its element — after all, the 28g (1oz) load is the origin of the 16-bore gauge size.

Yet, even during my lifetime its popularity has waned and the knock-on effect is that, without a big market, the cartridges to feed it are limited in choice and usually a bit more expensive than the commonly used sizes.

Fortunately, the 16-bore continues to survive and has a certain appeal with the more discerning shooter.

So, when I was offered the chance to test a 16-bore William Powell shotgun, I was not going to turn it down.

REFINED LOOKS
The Monarch 16-bore is a gun to satisfy the traditionalist — from its fixed chokes to its straight-hand stock, it is thoroughly conventional.

A five-pin sidelock ejector following the “London style”, it has a refined look typical of the British guns that some Spanish makers have become adept at copying — in this case, the respected firm of Arrieta, which builds the Continental range to Powell’s requirements.

The gun’s listed weight is 6.1⁄2lb, though on my scales the gun on test was a tad lighter, which is commendable given its long stock, which provides a 15.1⁄4in length of pull.

Many makers now tend to produce long-stocked guns, partly because people are generally taller than in the past, and also because it allows for easy adjustment of length to ensure a good fit.

There is a perception among shooters that long stocks are generally beneficial, and this is possibly a carry-over from clay shooting, though I suspect that, for game shooting, several long stocks eventually get shortened a little to aid a quicker gun mount.

The fore-end is also a touch longer than one would normally find on an older gun, but in this case it gives a visual balance to the stock and is in proportion to the slim, 30in barrels.

It is also practical, and practicality blended with stylish presentation is something to be admired.

HANDLING
The Monarch’s handling is just as good as its looks. The point of balance is just to the front of the fore-end knuckle, resulting in a slight positive forward bias but without it feeling slow or barrel-heavy.

This 16-bore is both pointable and fast, enabling quick target acquisition. Also, the drop across the comb, combined with a good amount of cast-off, is well suited to me.

My leading hand felt natural near the tip of the fore-end, while the hand-cut chequering on both the fore-end and at the hand of the stock provided good grip.

It was a comfortable gun that came to the shoulder and pointed pretty much where I was looking, which is always a boost to the confidence and hopefully a prelude to some reasonably accurate shooting.

LOCKWORK
The lockwork qualifies as a bar-action sidelock with forward mainspring and intercepting safety sears — regarded by many shooters as the best form of sidelock.

The strikers, or firing pins, are housed in discs screwed into the standing breech and locked in place with vent pins — hardly essential nowadays but, again, a neat, traditional feature.

As for the ejectors, these are based on the Southgate system, which has the twin benefits of simplicity and reliability — desirable features on any gun. The trigger-pulls tested at a crisp 4.1⁄2lb and 5lb, the front trigger being of the hinged sprung type.

The timing of the ejectors proved to be spot on, with quite a strong throw and, of course, the dinky safety button is of the automatic type — as one would expect on a game gun.

DECORATION
The engraving features a classically styled rose and scroll pattern on the lockplates, action body and furniture.

The blacking of parts including the barrels, top-lever and trigger-guard is carried out to a high standard, while the colour-case hardening to the action body and lockplates has a darkly clouded, almost subdued appearance that both adds to its charm and complements the blacked barrels and reddish-brown of the oiled walnut stock and fore-end.

TESTING
The chokes in the gun on test measured 0.005in or “improved cylinder” in the right-hand barrel and 0.025in in the left.

The latter equates to a measurement between half- and three-quarter choke — what is often called “tight half” or, by some older shooters, “modified half”.

The cartridges used in the test included Eley Grand Prix with the 26.5g (15-16oz) load this maker has produced for many years; Lyalvale Express Super 16-gauge with 30g (1.1⁄16oz) load; and, for some further comparison, some older stock Winchester cartridges.

The first thing I noticed was how sweet this gun was to use — the recoil with any cartridge was rather modest.

The second was my tendency to shoot slightly low, but this was due to the stock being a little too long for my build.

The patterns produced with the right-hand barrel showed a reasonably even spread, while the left tended to concentrate the shot a bit more in the centre.

The results were fairly much as expected and, at appropriate distances, were good killing patterns for the No.5 shot used.

In fact, the patterns produced with all the cartridges used, in either barrel, were tidy.

Even a few old SMI cartridges that I used up at the end of the test proved that this gun was tolerant of a variety of cartridge makes and loads.

Ultimately this 16-bore operates with no fuss, doing everything that is asked of it. 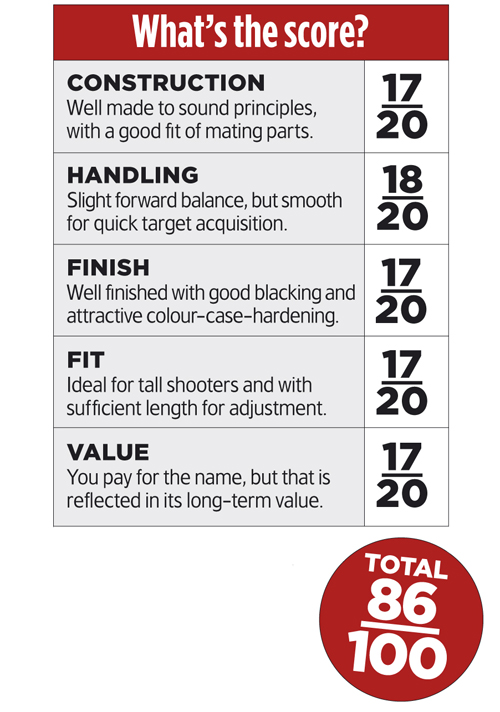 CONCLUSION
The 16-bore can be a good alternative to the 12-bore, albeit tempered a bit by the reduced choice of ammunition.

As a 16-bore, this gun ticks all the boxes — it is the right weight for its gauge, handles as it should, performs well and, with normal game loads, for some uses it has the edge over both the 12-bore and that popular alternative, the 20-bore.

Not everybody will be convinced, but for those shooters who appreciate performance with something a little different, the William Powell Monarch 16-bore is worth considering. 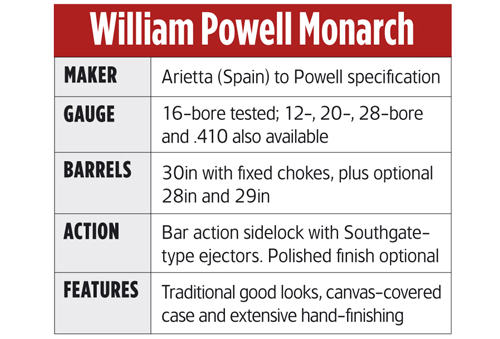