£360.00 (From)
TAGS: Guns for wildfowlingRough or walked-up shootingSemi-automatics
This product is featured in: Turkish shotguns – definitely worthy of consideration and here is why, Second-hand super semi-auto shotguns, and Guns for pigeon shooting for under £500.

Read why Richard Negus thinks everyone should have a Hatsan Escort semi-auto. 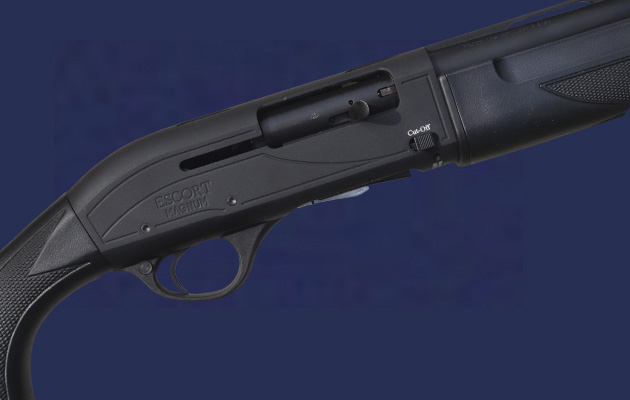 This Hatsan Escort semi-auto shotgun costs a third of the equivalent Beretta or Browning.

It’s dependable (perhaps not quite as much as the Beretta or Browning) and you won’t find it hard to get spare parts when you need to. Problems can usually be fixed quickly.

And because you haven’t spent a fortune on it you won’t get overly concerned about every little scratch or dent it picks up.

The Hatsan Escort semi-auto shotgun has been arriving in the UK in various forms for about 15 years and several thousand have already been sold. The manufacturers have been constantly tweaking the design.

There now a bolt release system that’s integral with the feed plate. To release the bolt you simply push the centre of the floor plate. The gas piston has also been modified as too has the connection between the action bar and its magazine loop. A useful safety feature is the addition of a magazine cut-off button that allows you to remove a chambered cartridge but leave the other two in the magazine. Useful because it means that you can cross a stile, gate or other obstacle without having to completely unload the gun.

As with most gas operated semi-autos, to keep the Hatsan Escort semi-auto shotgun cycling through smoothly it needs to be kept clean, so that all parts move as freely. Gas autos get dirty by the exhaust gas from the cartridge but they will work better if oil is smeared on the piston assembly.

Motor oil is best because it’s designed to take higher temperatures and does not burn away as quickly as light gun oil. It will get dirty, but can easily be wiped off and renewed. Because it doesn’t burn away as quickly, it also helps prevent carbon building up on the piston and other moving parts.

The gun featured here has a synthetic stock and fore-end with 28in barrels but one major feature of the Escort is the number of different versions it comes in. You can pick barrel lengths from 24in to 30in, wood or synthetic, camo patterned and 3in or 3.1/2in chambers. The gun comes with a standard magazine capacity of 2 + 1 but they are also available to firearm certificate holders with extended seven shot magazines. The gun can also be had in a true left hand version.

Should you buy this gun?

If you’re looking for a gun for rough shooting or wildfowling, then the Escort would make an excellent choice. It offers excellent value for money.

Marks out of 100 for the Hatsan Escort semi-auto shotgun

If you're looking for a gun for rough shooting or wildfowling, this would be a great decision