It would be a brave man indeed to challenge any segment of the market, but to design and make a new range, which would sell for between £2,000 and £5,000, would be particularly challenging.

However, if you got it right you might cause a stir, and make a very large amount of money, for such an area populated by giants such as Beretta, Browning, and Perazzi, and a slice of their action would be very nice to have, thank you very much. 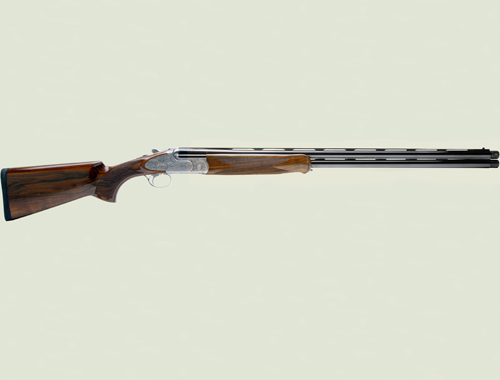 Now all we need is a shooting entrepreneur – someone with the money, the clout, and the sheer determination to make it work.

Unfortunately, all we seem to have – apart from the makers of hugely expensive guns only a tiny minority can afford – is a few guys who get their guns built abroad and sometimes give them English names with the thought it’s going to fool some of us. Their economy may have been in chaos for at least ten years, and their government for much, much longer than that, but they have a happy knack of making guns that people want to buy.

And, now and again, a new company comes up with a super product.

Such a company is Caesar Guerini, and in the ten years it has been in existence it has made itself a super reputation.

There are round about 40 guns in the range, and that’s without counting different barrel lengths and bores. What’s more, their UK importer has a growing network, which, at the last count, was 68 dealers.

In other words, you are never far from a Guerini, should you care to look at one.

THE GUNS
All but two of the guns are O/U boxlocks – the better examples being side-plated. Included in the range are guns for all of the main competition disciplines, and field shooting.

The remaining pair are gas-fed semi-autos for field shooting.

All the O/Us work on similar principles – partly Browning-like with hammers hinged at the bottom and sears hanging from the top strap, and a low-mounted full-width bolt engaging with a bite in a barrel lump. However, jointing is by stub pins, very much in the Italian tradition. This latter feature keeps the height of the action down.

The gun used for illustration is the Maxum Sporter, which is available with barrel lengths ranging from 28 right the way up to 34 inches.

The barrels have 2.3/4in chambers, together with long forcing cones and multichoke tubes, a 10mm parallel top rib and ventilated side ribs.

Woodwork is particularly attractive, and the push-button release for the schnabel fore end adds a real touch of class.

HOW MUCH?
The gun, as illustrated, retails at around £3,000 or a little more new, but there are more and less expensive alternatives in the range.