William Powell Marquis shotgun.
Last year we tested and were impressed by the William Powell Marquis 12-bore,
a traditionally made but competitively priced sidelock side-by-side made for the respected old English firm by Arrieta of Spain (a company not without its own reputation for endurance and integrity of manufacture).

This month we look at the new 20-bore version of the same gun. It is equipped with 30in barrels,
a concave rib, a straight-hand stock and a splinter fore-end, and hits the scales at 6lb 3oz.

FIRST IMPRESSIONS
Nothing fancy here: this is the least expensive sidelock in the ever-expanding Powell range.

The engraving on the silver-polished action does not take your breath away but it is executed by hand.

The wood is not spectacularly figured although it is competently finished.

This is a competitive price for a true sidelock ejector gun ? the cheapest English sidelock costs nearly 10 times as much. Have any corners been cut?

Well, as I have noted, the engraving is ordinary (competent, inoffensive scroll) and the timber nothing special (though well presented with hand-cut chequering and an oil finish). What of the rest?

The gunmaking appears sound in all departments. Wood-to-metal and metal-to-metal fit are better than average. 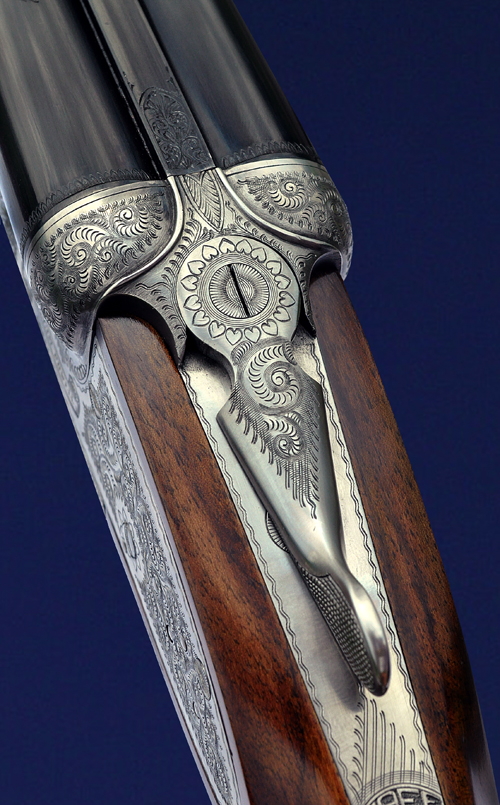 Having seen Ariettas being made, I can confirm that, notwithstanding the low price in this case, they are all still bench-made guns; smoke lamps and hand-powered files are much in evidence at the Arrieta factory.

I liked the basic form of the Marquis as well. It conformed to the British game-gun norm.

The gun closes with a reassuring feel of quality and the jointing is up to standard.

Barrels are well presented and free of significant rivel or blemish.

They are true chopper-lump and plated internally, as are nearly all
Continental guns.

When one handles the gun it feels right, with a better-than-average weight distribution thanks to the sidelock design (putting weight between the hands) and extra length in the barrels promoting pointability and control.

I much prefer longer-barrelled 20-bores and 28-bores.

Mounting the Marquis, one is struck by fast handling and the good stock shape.

The stock had a length of pull of 15.1⁄4in (allowing for shortening if required).

The straight-hand grip is of Holland diamond pattern. It is not big, yet it anchors the hand well.

The splinter fore-end is a good size although the end cap for the Anson push-rod fore-end fastener looks a little bare.

Fairly plain though it may be, the basic specification of the Marquis was sensible.

I liked most of the functional details.

The well-proportioned concave rib was finished with a metal bead of good size and nice, pawn-like form.

The Purdey-style safety was positive to use. There were few if any eccentricities or negative points of note evident in the test gun, save, perhaps, for the screws visible in the base of the action balls.

TECHNICAL DATA
The chopper-lump barrels are made from Bellota steel (a high-grade, high-nickel type used by most of the best makers in Spain).

Chokes are fixed at 1⁄2 and full to allow for regulation to requirements.

Forcing cones are quite short; Spanish gunmakers seem reluctant to follow the modern trend towards longer ones.

The bores are both marked 15.8mm for diameter, which is traditional but on the tight side for a 20-bore (some associate tighter bores with improved penetration although others suggest they impact negatively on felt recoil).

The action, which is made from a forging, is of classic design.

It is in essence a Holland & Holland sidelock with disc-set strikers added. V-springs power the hammer and there are intercepting safety sears in the locks.

These depart slightly from the Holland pattern in that the intercepting safety sear itself is powered not by the usual small and delicate leaf spring, but by a small coil spring in a tube acting on a small piston rod pushing against the sear arm.

Ejector work is of reliable Southgate pattern operating on the over-centre principle.

SHOOTING IMPRESSIONS
This little Powell shot splendidly. It was quick to use, so quick that when
I tested it on a skeet range at a partridge-like bird I had something of a competition with myself to see just how fast it could be shot (answer: well before the centre peg).

In spite of its relatively light weight and relatively tight bores and choke, the felt recoil was modest.

This may be put down to good fundamental design and good gunmaking.

Yes, the aesthetics of this gun?s decoration are average, but it is a terrific gun nevertheless at a price that makes you wonder how the Spanish trade manages to do it.

Some Spanish guns are over-priced today.

This is not one of them.