Winchester
This product is featured in: Winchester XPR .243 reviewed.

Winchester Select Light 12-bore shotgun.
I have always been a great believer that, for most sporting purposes, the length of a shotgun?s barrels should be in proportion to the user.

In other words, a tall person is better off with long barrels, which would help to balance the necessarily longer stock.

For the opposite reasons, a shooter of short stature is usually more comfortable when using a shotgun with shorter barrels.

Not everyone would agree, especially fans of the Churchill XXV and its copies, which is taking abbreviated barrels to the limit.

There is no doubt that stubby barrels are an acquired taste, but they do have their uses and can sometimes be an advantage.

I find they are particularly handy when shooting from a hide, or in thick woodland where the sky only appears in patches and a bird is almost on top of you before you see it.

A TRUE LIGHTWEIGHT
The Winchester Select Light field model on test has 26in barrels and balances almost exactly on the knuckle of the fore-end iron, though the 30in version is a little front-heavy.

In part, this balance is achieved by use of an aluminium alloy action body, which has a steel insert neatly dovetailed into the face of the standing breech as an aid to longevity.

The attractive stock wood is sound, but not especially dense or heavy. This, along with a large internal cut-out, reduces the weight even further.

The result, depending upon the barrel length that you choose, is a gun weighing around 6.5lb. For a 12-bore over-and- under, this is quite creditable.

The handling of this 26in example is good without the ?choppy? feeling that some short-barrelled guns give.

It is still quick and surprisingly steady in the aim, though it might not be one?s first choice as the gun for high pheasants.

However, on a pigeon flightline with fast, wind-driven birds well in range, it proved its worth.

Some easy misses may have been accounted for by a tendency to shoot high, as later found on the pattern plate. This is fine once you become aware of it.

This was in spite of a fairly standard drop across the comb of 1.5in to 2.5in at the heel.

ACTION STATION
The light alloy action body is well made, with the lockwork neatly arranged and the novelty of wide-set twin cocking rods. 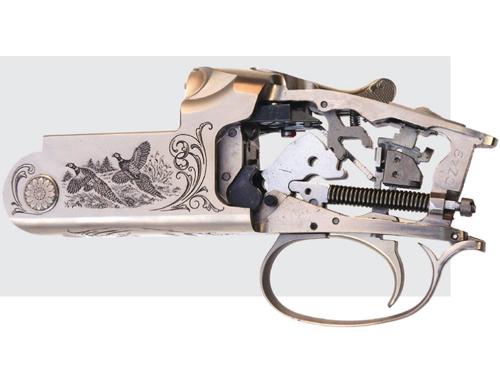 The hinge discs and high twin lug locking arrangement are similar to that used for many years by Beretta.

GOOD LOOKS
At first glance this does not appear to be a particularly short-barrelled gun.

It is only the distance between the muzzles and the front of the fore-end that gives it a slightly stocky look.

Around the action, it is clean-cut and chunky, with attractive decoration depicting pheasants, woodcock and a keen-looking spaniel retrieving a partridge.

Perhaps that is not so far amiss ? if my experience on low, fast pigeon was anything to go on, this would make a good driven partridge gun.

Overall, the lines are pleasing, with a large, practical trigger-guard and a cheeky upturn to the thumb-piece on the top-lever.

The sweeping line across the top of the comb is easy on the eye, while the curve of the pistol grip will accommodate most hands.

If anything, the fore-end appears proportionally a little large, but that is partly due to the visual effect of the short barrels. 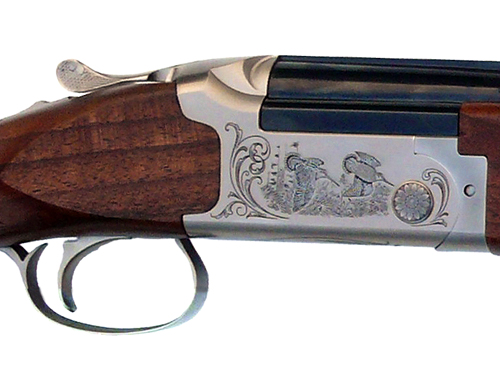 The interesting thing about this gun is the mechanical parts, which are well designed.

The action is wide ? it has to be, because the twin locking bolts engage nearly a third of the way up the top barrel and to accommodate this requires extensions on both sides.

This makes for a positive lock-up and the taper on the bolts is designed to allow for wear.

The hinge discs that the barrels pivot on are steel and screwed into the sides of the bar of the action body.

These are also higher than a conventional hook, technically a good idea.

Someone has given this model a good deal of thought, and this can be seen in parts such as the cocking rods.

This is also a twin arrangement that presses directly on to the ejector sears, which operate the sprung extractors.

This is not surprising: while component parts are outsourced, these Winchesters are assembled at the Fabrique Nationale in Belgium, which owns the Browning, Winchester and Miroku names.

The barrels are chambered at 3in, and proofed for use with steel shot. Five chokes are provided as part of the package, including full, three-quarters, half, quarter and cylinder with a substantial choke key.

To complete the kit, a trigger lock and spray can of oil, as well as the instruction book, are provided, all supplied in an eye-catching bright-red guncase.

ON TEST
The day I tested this gun was a little marred by a howling wind, which made holding the Winchester true on the pattern plate rather tricky. 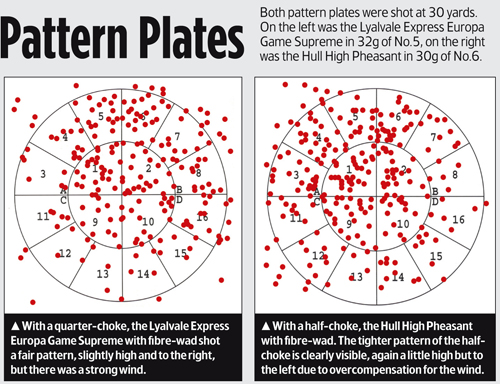 Regardless of the wind, it did have a tendency to shoot high, but in the main this gun patterned well, though it performed better with some cartridges than others.

To see how such a light gun responded to heavier loads, I also tried Eley Alphamax+ Magnum load with 46g of No.3 shot.

The recoil with this load was noticeable, but the shot pattern proved to be very effective.

Of the cartridges used for testing, the best of the game cartridges turned out to be the Hull High Pheasant and the Express Europa Game Supreme with, interestingly, the Eley Pigeon coming in a close third.

I found the non-automatic safety a bit of a nuisance on the brief but surprisingly successful pigeon test, but the wide trigger and crisp pulls, even at close to 6lb, proved to be both comfortable and practical.

The muzzle flip with heavier loads was noticeable, but in such a light gun this should not come as a real surprise. 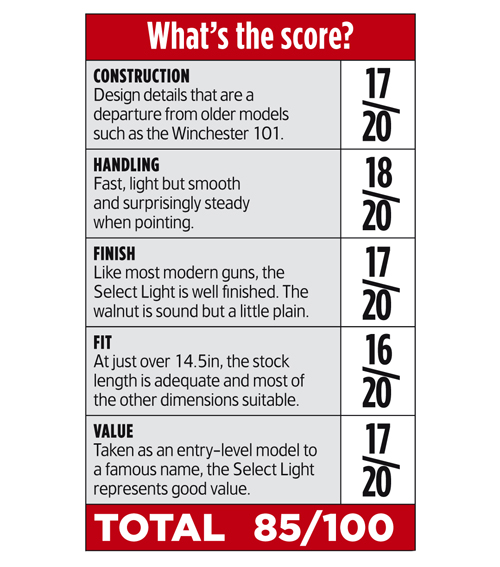 CONCLUSION
The Winchester Select is an entry-level model to a famous name. In some ways it seems almost a 21st century version of what the Medallist was to Browning in its day, 30 or so years ago.

Having said that, the technology on the Select Light is new and advanced.

In its 26in barrel format it is a useful gun and would be a good choice for pigeon shooting over decoys where it is as quick as a smaller-gauge gun.

In fact, for general purpose use, I found I was enjoying the short barrels. It is never too late to change! 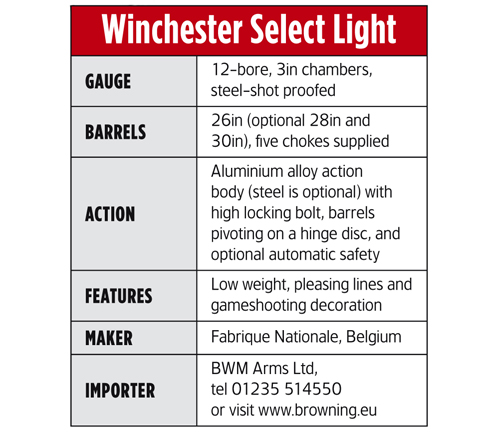