It’s not rocket science. Basically what you are trying to do is to get the moving clay to collide with your shot. Sounds simple. But not always so simple in practice.

What you need to do is improve your clay shooting technique. By taking a close look at the images below you’ll get to grips with the mechanics of it all. Let’s start off by imagining you’ve got a bird that’s crossing in front of the stand, travelling through the kill zone at 40 miles per hour.

That means that the target is moving at 58.6 feet per second (fps)

The distance from the shooting stand to the clay itself is 100 feet.

In the same tenth of a second that the front of the shot stream takes to travel to the clay, the clay itself has also been moving forward for the same amount of time. The minimum amount of lead needed to smash the clay

The example above shows you the minimum lead needed for success.

Never shoot at a clay

You’ll also now understand why if you shoot at a clay you’ll always miss behind.

Of course this doesn’t mean to say that every time you hit a bird 100 feet away with around six feed of lead you’ll always get a hit. Obviously there are far too many variables involved.

But now you know the logistics of making a hit between the shot stream and the clay.

The basic principle is that muzzles must be ahead of the bird when you pull the trigger, to allow the clay to run into the stream of shot.

There is always a slight delay before the shot stream collides with the clay.

Even with the best technique in the world, to succeed at a high level you must be able to size…

Jonty has has been enjoying his Krieghoff Parcours, which he has shot with for about a year and uses ¾…

Buyer’s brief:  “I have been shooting clays for the past six months with guns hired from the shooting ground. Most…

It’s simpler to talk about the angle of the muzzles, relative to the position of the bird, as we squeeze the trigger – rather than the perceived distance the barrels are ahead of the target. Something the image below explains clearly. 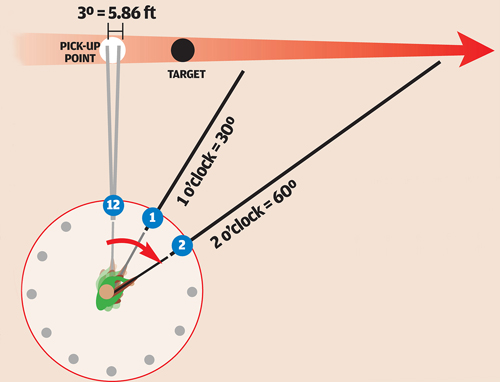 No matter what the distance is between the gun and the bird, the angle remains constant.

A clay pigeon shooting tip. Imagine a clock face and think of the gun barrels as the hour hand. Saying “shoot at two o’clock” will help you remember.

Keep the gun moving after pulling the trigger. Stopping your swing is one of the most common reasons for missing clay targets.

If you stop the gun you’ll almost certainly miss behind. So one of the key clay pigeon shooting tips is – don’t stop your swing.