And that’s the formation of shoots as well as new shots.

Yes, hundreds of shoots exist the length and breadth of the country, but there’s still a necessity to see new enterprises starting up so that our great-grandchildren can enjoy exactly the same wonderful country sport we have.

That is why I felt a reassuring confidence in the sport’s future when arriving at the Hill Farm shoot – a family-run operation nestled in the middle of some stunning Warwickshire countryside – and saw a plethora of young bucks and their lady acquaintances readying themselves for the day ahead. In fact, of all the shoots that I have covered for Shooting Gazette, this was the first in which, bar one set of parents, I was the oldest person there!

To say ‘young bucks’ might be a slight disservice to the assembled throng as most, if not all, were professionals in their own right – with farming, surveying and sporting management featuring highly in their chosen vocations.

It was two of their number that got the shoot off the ground in the first place.

Hugh and Edward Darbishire, aged 26 and 24 respectively, started looking at the possibility of a shoot on the farm in their teens, and it was Edward, then aged 14, who sowed the first seed by building a release pen.

The farm itself has been in the family since 1938, and has had no involvement in pheasant shooting in its long history, which makes it even more remarkable given the standard of sport it has reached in a relatively short time. As Edward said: “In the first year we put down 40 pheasants and then topped this up by putting down 100 for the next three years. Having not experienced any sort of pheasant shooting on the farm, and with no large woodland areas, it was really a case of looking at the possibilities and utilising the resources and topography available to us. In the third year we added 60 duck to the shoot as a way of adding a bit of variety to the various drives. This then rose to 100 the next year. In the shoot’s second year we added a new pen and after this time we were doing two days plus one rough shoot day.”

As I stood there listening to Hugh and Edward talk about how they started the shoot I was impressed by the ease in which they talked of its birth.

Maybe it was a wonderful youthful ignorance of the hardships that can be encountered when trying to bring to life any business that you want to see work, but they both, in equal measure, seemed fearless and certain that whatever they were going to do would work, and work well. This could be the key to us all – start young and be in a better position to tackle the mental and physical obstacles that may stand in your way.

Could be something to ponder on. Anyway, I digress.

Using the farm to its full potential it wasn’t long before the twosome were able to offer a let day.

And after five years, a bigger pen and more birds put down, the shoot really started to take shape, and now runs around seven days a year.

With the full support of both parents, the Hill Farm shoot came into its own. Simon and Angela are both country sports enthusiasts themselves and gave their blessing to whatever the boys wanted to do, provided it was in keeping with the farm and beneficial to the land which it occupied.

The majority of the shoot’s success is a result of the fact that Hugh and Edward have integrated it into the farm rather than forced it.

In total the shoot now has three release sites, five ponds and nine cover strips – some of which are made up of wild bird covers.

There is a third member of the team, Richard Foxon.

Twenty-six-year-old Richard joined the shoot three years ago and has imparted a good deal of his own pheasant shooting knowledge to the operation.

I actually first met Richard a number of years ago when he was the team captain of the Bloxham School clay shooting team. 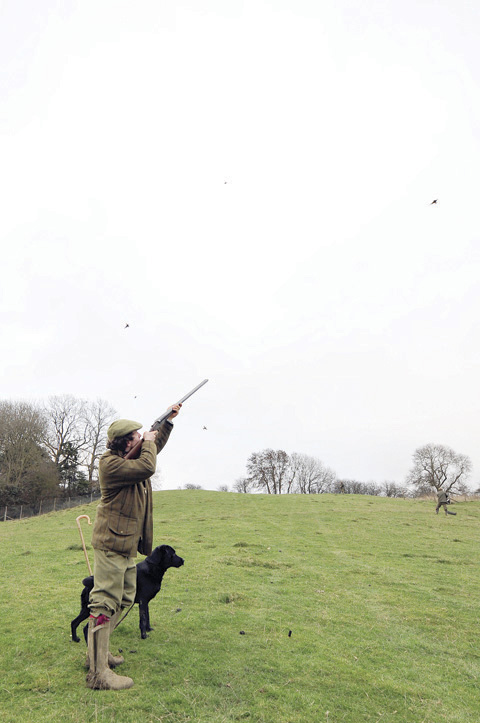 Hill Farm shoot is a youthful enterprise full of promise for the future of the sport.

I was taking photographs on behalf of Shooting Gazette and it was Richard’s team who picked up the coveted trophy at the end of the day.

Hugh now runs the shoot on a day-to-day basis, as well as the family farm. Edward contributes when he can between working full-time as a sporting agent, and similarly Richard, who works as a development surveyor for a national firm of chartered surveyors and estate agents.

All three self-finance the shoot and the beaters, of which there are many, beat on the shoot for free.

All three of Hill Farm’s shoot managers explained how important the beaters are and how they make the shoot what it is.

Most are friends of the young men and come from the local area.

The rest of the running costs are covered through three let days.

All of the great traditions of pheasant shooting are followed at Hill Farm and with the champagne flowing at elevenses it was with a fluid step that Edward led the team of guns to their pegs.

As was to be expected on a shoot where significant attention is paid to detail, the birds were presented well and provided excellent sport for the waiting guns.

There was a duck drive and the anticipation of what was to come was palpable as each and every gun attempted to bag themselves a number of these swirling, sporting birds. 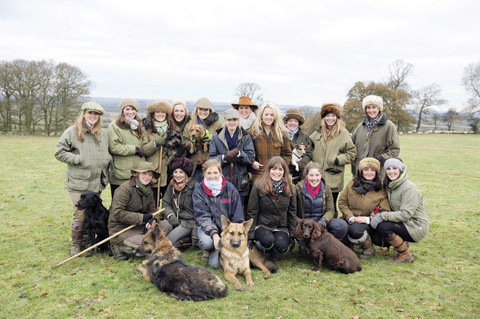 There was no shortage of supporters on this pheasant shooting day.

The pheasant drives hit exactly the same spot and it wasn’t long, as with all good things, before the day came to an end with a drive that commanded memorable views over the surrounding countryside and beyond to the Malvern hills in Gloucestershire.

Due to a healthy relationship with neighbouring landowners, plans have been made to expand the shoot’s boundaries and increase the potential number of drives.

All three of the young men involved still possess the same enthusiasm that saw the shoot rise to its current elevated position, and I don’t think it will be long before ideas are afoot to widen its reach even farther.

The Hill Farm shoot is a great example to us all of what can be done – a reminder that whilst we don’t live forever, our legacies certainly can.