I have been shooting in the Balkans for 10 years, but it was only last season I encountered anything similar to a British driven shoot. This came about through three friends; Maurice Robson, Peter Sinclair-Knipe (an ex-Life Guards officer and army chum) and Bogdan Sjeric of the Lasarotta sporting agency, with whom I have hunted throughout Croatia and Serbia. They had told me of a new red-legged partridge hunting being developed on the beautiful Adriatic coast of Croatia. Better than that, they invited me to sample it and pass comment.

The original mission statement was both sporting and commercial (in so far as such projects ever can be). Peter said:

“We wanted to create something that could provide good driven sport in a beautiful and unusual setting, even when the season in the UK had finished. It had to offer real value for money, not to mention an interesting, civilised destinationwith good culinary and hunting tradition only a couple of hours’ flight from London.” The first challenge for Peter and the team was to find a location. A truly beautiful one was identified on a small peninsular some 10 kilometres east of the major Istrian city of Pula. In darker times the land had been a military range and used for practice bombing (the odd concrete ‘bomb’ still lurks in the scrub), but what is much more noticeable is the romantic blue of the Adriatic. A lease was secured and the battle of the bureaucrats began.

Special permissions were needed to release non-native redlegs on the ground. Suitable local partners had to be found, too, and this is where Bogdan, who has been organising hunts in Croatia for years, came into his own. He found a local vet, Branimir Reindl, who had worked for the government, and a local farmer with his own walked-up shoot, both of whom were willing to share a proportion of the risk of the new venture. Provisional permission was obtained after about six months of hard work – such things are still quite difficult in former communist countries. Branimir Reindl, one of the founding members of Istria 1.

A few months on from this all the details were finalised and 20,000 birds were bought as chicks from a dealer in the south of France and driven by lorry across the Alps and south to the shoot. Which is not as long a journey as you may imagine at first.

Accommodation for the avian immigrants was created at an abandoned game farm which, in the era of the old Yugoslavia, was hatching 70,000 birds a year. The birds were fed initially with high-protein concentrates, then on the ground, and later with pellets and wheat from feeders. There was also good grass and the redlegs proved themselves to be all too fond of local cabbage, resulting – sadly – in substantial damages being paid to local farmers!

Partridges, of course, like to search for insects and small roots, and especially enjoy the cover of maize and similar crops. Although grassy, the land is quite rocky, which provides an abundance of insect life to supplement their diet. Birds were first released on the peninsula at the end of July 2011, with the first shoot day planned for mid-September. They suffered some attrition from predators as one might expect, especially from raptors including goshawks and peregrine falcons. Happily, in Croatia, both species can be legally removed by means of cage-trapping and then released in the wild some 100 kilometres away.

Two full-time gamekeepers were employed and spiral spring feeders were set up, filled primarily with wheat. The new birds were tended day and night. The task was made somewhat more manageable by the ground, which is surrounded by the sea on three sides. By the time the first shoot day arrived, a team of local beaters was assembled with recruits from a nearby hunting club, most of whom were expert dog handlers (pointers predominate in this region).

Some 10,000 birds were put down on the shoot, the rest held back for breeding and re-sale. As things progressed and there was a surplus of birds, a second high bird shoot – which came to be known as Istria 2 although some way distant – was also developed in a mountain area on the edge of the Velebit range part of the Dinaric Alps. Joseph, the gamekeeper at Istria 2.

In order to look after this new ground too another keeper was found, an extremely amiable and able old Jägermeister called Joseph, who speaks great English and German, and has good experience of all the local forms of hunting. At both locations, drives had to be developed.

“We had to get a tractor to cut bushes at Istria 1 to make lines for the guns,” said Peter.

Bogdan, Branimir (the vet) and Peter decided on the plan for the shoot, which included drives through evergreen chaparral shrub and macchia bush, as well as some pine woodland and cabbage fields. Istria 1 also included an interesting, challenging and usually productive drive in an old quarry. Peter and Bogdan designed the drives at Istria 1 so they were not spreading the birds out too much. It is certainly a big area, totalling several thousand acres.

“We wanted to take full advantage of the fairly diverse terrain, which included traditional scrub, cropped fields, pine forests and the quarry,” said Peter. “One particularly interesting feature – and one I think was much enjoyed by all who shot here – was the experience of shooting while standing near the beach on an inlet of the Adriatic, with blue water visible.”

By my experience, outstanding hospitality was certainly a big part of the deal too. There are some excellent local hotels and restaurants. They pulled out all the stops on every occasion for us – they seemed a naturally friendly lot and we were there outside their normal holiday season too. 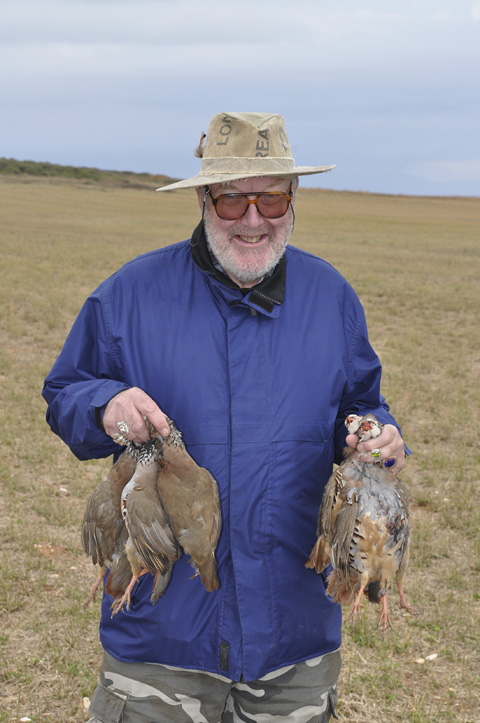 Maurice Robson, one of three men who persuaded the author to come to Croatia, with two handfuls of redlegs.

I could list many happy memories but perhaps the one that stays in mind most is that of listening to Maurice at a grand piano playing classical music after a meal that would not have disgraced Marco Pierre White.

On the shooting front, one of the mid-morning drives on my first trip had us literally next to the sea, shooting good birds in balmy mid-September conditions. It was wonderful. At Quarry, Peter and I filled our boots with first-class birds at good range and everyone had broad smiles during the pick-up. As if this was not enough, we then had the experience on two of my three trips to Istria of piling into Bogdan’s people carriers and trekking to the mountains. The Hon. Freddie Hamilton awaits birds in the scrub with his picker-up.

After a drive of half an hour or so, we arrived in another spectacular area. The shooting was positioned in what is effectively a giant bowl, not unlike the Devil’s Punch Bowl but much larger. The advantage of this is the birds can be blanked in on the tops and they can utilise the wind no matter where it comes from – making for some really exciting high and fast drives.

The shooting here would match almost any domestic red-legged partridge hunting. The hospitality continued to be great, with the food cooked over an open fire by one of the keepers who fancied himself as a chef. Stuffed, we drank local wine and beer.

At Istria 1, there were eight days shooting in total last season enjoyed by four shooting parties, with the number of guns varying between six and eight. Typically, there were between five and six drives a day, with a beating team of 10-15 (most with dogs). Proceedings usually began by pushing down from a high point near a small lighthouse to lower ground. Birds were usually driven north and into the wind, away from the end of the peninsular and towards a nearby marina. This built up numbers for the final drives, Marina and Quarry, where the sport was quite intense.

Six days were shot at Istria 2, which incorporates, essentially, a set of valleys and woods where the birds tend to hide from the wind. The usual plan here was to push the quarry out of the comfort of the protected forests on the high ground, driving them downwind over the set of valleys. Much steeper gradients are involved, resulting in some beautiful scenery and first-class shooting. The last day of the season was snowbound but produced some memorable birds and excellent sport, with an ultimate bag of 100 from six guns. 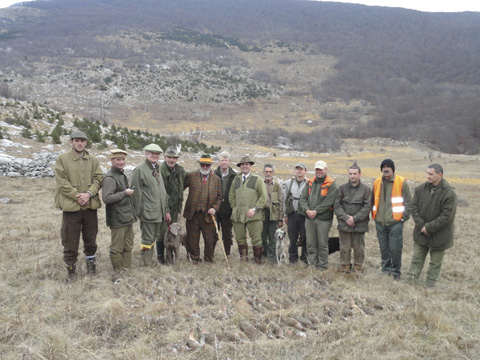 The team after a long day’s shooting in Croatia.