For the rough-shooter or pigeon decoyer the going away bird is a pretty regular type of target – but it can still often cause a few problems, especially for the more novice shooter.

Part of the problem is because – more often than not – the going away target is a second barrel shot.

There’s no real reason it should be like this, it’s just that a lot of shooters feel they have to rush the shot – generally resulting in a miss.

I know I say this ad nauseam about every type of target, but it’s important to remember that this type of bird is just that – a target, just like any other.

You must take as much time with the second shot as you did the first.

The second barrel should never be fired in desperation or in panic.

Get the second pick-up point clear in your mind, choose your kill point, don’t cover the line of the bird or lose sight of it, bring the gun up to the shoulder and shoot.

With that in mind, if your approach to killing it is correct it shouldn’t really cause major problems.

So let’s look at the best way of tackling these speedy and sometimes very missable birds and how we can replicate them to practice on clays.

For the sake of argument let’s assume we’re shooting a straight, going away bird on a typical English sporting layout.

The first things to consider are the gun mount and stance because if you get these two wrong it’s pretty obvious you’re going to struggle to hit the target.

The stance should be comfortable, leaning slightly forward, with the weight on the front foot that should point in the direction of the bird’s line of flight. The muzzle of your gun should also be pointing in the same direction as the line of the bird.

Make sure of one thing, though, if your gun is pointing too far to the left or right, you’ll have to swing onto, as well as through the target to hit it, which, again, makes things more difficult than they need be.

GUN MOUNT
Gun mount is also important. I find that the best ‘ready position’ (the point at which you call for the bird) is pretty much the same as it is for most targets, and that’s where the butt of the gun is pocketed just under the shoulder. This means the amount of travel to mount the gun is kept to a minimum.

When you raise the gun to the shoulder you’re looking for a single smooth action.

A good parallel mount will always serve you well on going away birds.

If the muzzles of the gun are too high to start with they can obscure your view of the clay as it leaves the trap. Alternatively, if they are held too low, you’ll probably end up playing catch-up with the clay, almost certainly resulting in a rushed shot.

In summary, your stance, ready position and gun mount should never compromise your view of the target as it leaves the trap and flies away.

You need to be able to see the bird at all times.

CONTROLLED ATTACK
The going away type target is one where you should definitely try and develop what I call a ‘controlled attacking’ approach.

Get stuck in – don’t lean back or shy away from the bird and I promise that your scores will improve.

This doesn’t mean rushing or snatching at the trigger, though, as this can often result in muzzle flip and a nought on your scorecard.

Don’t be intimidated by the impression of speed of the bird or the quick release, the clay will never get away from the speed of your shot.

Just tell yourself that all you have to do is arrange a collision between the two!

Controlled aggression is the name of the game.

This helps take your shooting back to an instinctive level and I find it an effective tool when you’re trying to increase your scores.

GOING AWAY BIRDS
The most common reason that shooters miss going away birds is simply because they aim at it!

Heaven knows why anyone does this – you don’t aim a shotgun at anything other than a static target (see last month’s piece on shooting squirrels, for instance) – but it could be because the trap is generally quite close to the stand and they feel they can break the clay almost as soon as they see it. Or it could be it’s because the bird simply looks easy, a right dolly of a bird, and it draws you into aiming – just to make sure of a kill!

Another mistake is to try and cover the target and fire because this invariably results in missing over the top.

Generally speaking, the best approach is to choose your kill point, bring the gun up and, when the bead on the muzzle is just about to touch the bird, shoot.

If there’s a crosswind, don’t forget to compensate for any slight curve or swing the bird might take – it’s rare that any clay flies dead straight throughout the entire course of its travel. 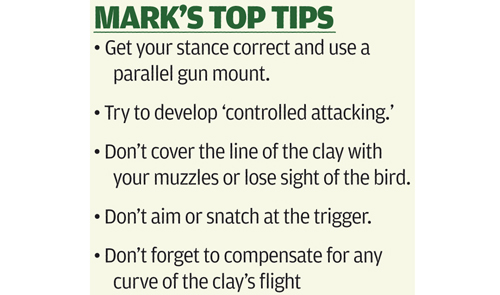