Some tips on tackling the trickier targets you're likely to meet on a Sporting layout - long distance and super high.

If you’re going around a Sporting layout without an instructor by your side, most shooters should probably hit around 50% of their intended targets.

But those who have invested in practice time on mastering high birds will get even higher scores.

Which shows that every target is hittable if it’s tackled correctly.

Don’t decide that a target is beyond your capability.  If you want to learn you need to give it a go and improve by your mistakes.

When you ask the buttoner to show you the bird don’t start getting despondent if you think it looks tricky.

Course designers – and I am one – often make the presentation of fairly standard targets look difficult to hit.

The emphasis here is on the word ‘look’ because, in reality, such birds are generally no more difficult to break than any other… it’s just that in the eyes of the shooter they look extremely hard to hit. But no course designer will present a bird that is impossible to hit.

What actually is ‘long-range’ in respect to the typical shotgun/cartridge combination? I consider long-range targets to be around the 45-50 yard mark. You can break clays at greater distances but to do this consistently (and cleanly) tends to demand an above-average performance.

If you want to hit targets out to 50 yards it’s important to know what a standard clay looks like at that distance. The simplest method is to measure it out, then get a companion to throw a few clays high into the air at that distance. You stand back, without your gun, and take note of what they look like.

Or you could stand a target on its side on the ground like a bolting rabbit. This will also give you an impression of the clay target’s size. True, it does look small.

On the other hand, because the target s further away it’s going to be in view for longer than usual. As a result, it might look as though it is travelling more slowly.

The bird is the same size, and it’s travelling at the same speed as any other clay from any other trap.

It’s just that what you see – the perceived image – is so different from what you’re used to. 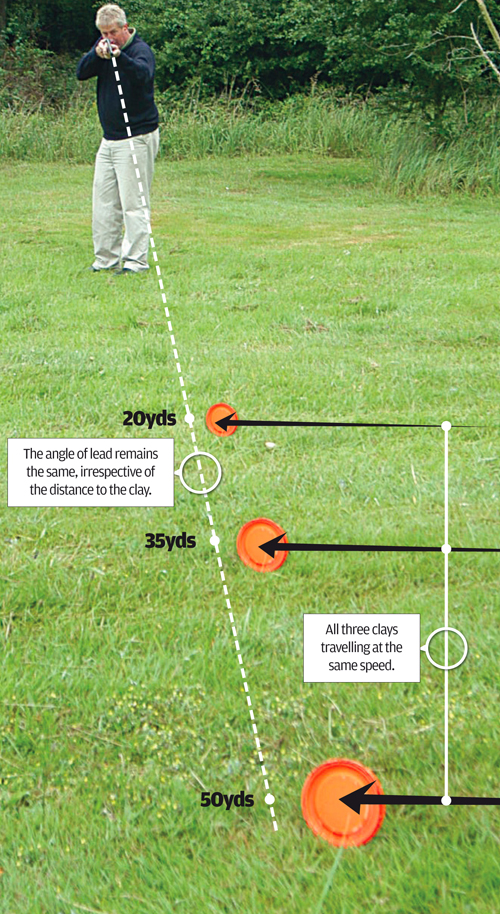 Just remember that the amount of lead you need to kill the bird is the same. The angle that the muzzles are ahead of a 50-yarder when you pull the trigger is exactly the same as one at 25 yards, assuming they are both travelling at the same speed.

If you were shooting a mini, flying at the same trajectory but at half the distance from the shooter, the bird would look almost identical in the air.

The important thing is that you need to be ahead of the bird when you fire.

Mastering high birds can be daunting for any shooter, particularly one without much experience.

However they will be hittable if you treat them just as you would any other target.

Your swing needs to be smooth and unhurried, as it should for any bird. Don’t be tempted to mount the gun earlier than usual because the target is in sight.

Study the flight line and wait until the bird is approaching your intended kill point before you start your mount and swing.

If you mount the gun too early you’ll find you’ll probably end up aiming at the bird. This is almost a guaranteed miss and it will also make your arms ache after a while.

Judging distance is not so easy with high birds because there are fewer reference points. There’s no easy way to learn how to judge exactly how high a bird is, but I remember seeing a demonstration at a game fair once where a life size dummy of a cock pheasant was hung beneath a balloon and shooters were asked to judge how far it was away. Most of the shooters underestimated how high it was.

Many shooters, irrespective of whether they're into clays or game, often struggle to hit high birds

We’ve got plenty of suitable 12-bore loads available for shooting high birds but what about the increasingly popular 20?

Hitting high birds consistently is generally a  matter of confidence.

The angle of lead given will be the same for a lower bird, irrespective of how far away the bird is. Remember your sight pictures for other targets, relax, don’t get flustered and let your instincts take over.