Pigeon shooting: Assessing flightlines.
As experienced decoyers, we routinely talk about ‘flightlines’ – often taking for granted that less experienced pigeon shooters know what we are talking about.

Consequently, one of the commonest questions I get asked during pigeon seminars run by the British Association for Shooting and Conservation is: “How do I find an active flightline?”

Well on the face of it, nothing could be simpler. You watch a known roosting wood soon after daybreak, observe any pigeons flying out and follow them with your binoculars until they land on a field.

Bingo, you’ve got yourself a flightline.

Oh, if only it were that easy!

To make sense of it all, we need to understand why birds, and pigeons in particular, follow invisible paths in the sky.

The reason, of course, is that woodies like to feed with their pals, and because they cannot communicate verbally, they rely entirely on visual stimuli to locate the feeding flock.

That’s why they have the white wing bars; visible from long distances whilst the bird is in flight, and the white neck flash that indicates when a pigeon has found food.

A pigeon will be able to ascertain, just by looking at another pigeon in flight, whether that bird is going out to feed, going back to roost, or simply looking for a mate.

If it’s flying out to feed, then in due course, it will follow the same line until it reaches the field where the rest of its mates are feeding.

It’s rather like a series of minor roads that eventually join a motorway, all heading in one direction.

The further away from the target field you are, the more fragmented the line will be, but as you get closer, every bird will be on the ‘motorway.’

If you are really lucky, you may get two or sometimes three motorways – multiple flightlines servicing one field.

These are the fields that tend to yield the really big bags.

DECOYING ON THE FAST TRACK
As decoyers, our best chance of success relies on keeping these motorways free running so that a steady stream of birds continues to arrive at our chosen spot.

It therefore pays to consider ways of doing this. Always walk birds off the field you plan to shoot before you build a hide and set out the decoys.

First and foremost, is the need to clear any feeding birds from your chosen field as soon as you arrive, and by ‘clear’ I mean far enough away so that returning birds cannot hear your shooting.

If at all possible, try not to fire straight down the flightline – noise travels much further downwind – and on a windy day it’s quite likely to disrupt the line for more than half a mile if you are shooting straight down it.

Just by adjusting your position so that you shoot across the wind can have a huge effect on birds coming up the line. 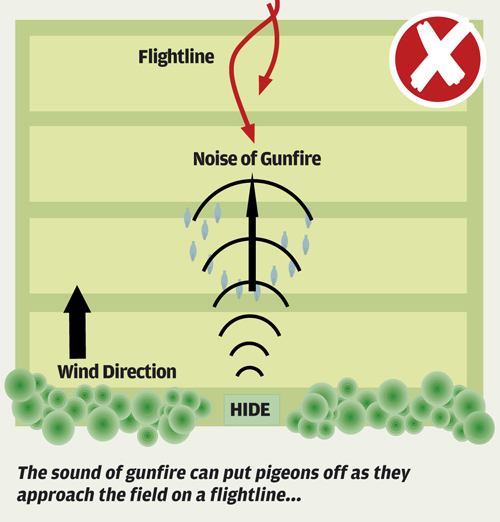 Similarly, constantly faffing around outside the hide, either picking dead birds or fiddling with the pattern, will also kill a flightline, if only for a few minutes.

What happens is, a pigeon spots you in the open right in the spot where he was hoping for a quiet feed, and naturally veers off in alarm, invariably heading back from whence he has come.

KEEP HIDDEN
As we have already mentioned, any pigeon seeing one of its pals hightailing it away will, in all probability, turn away too, having recognised the warning signals given off.

Pigeons get used to noises in the countryside, whether it is from gas guns or farm machinery, but they never accept human activity near their feeding ground, so if a wounded bird is walking away from your layout and you have no dog with you, shoot it again.

Also, provided pigeons are still responding to your decoys, don’t worry about picking up shot birds every two minutes, nothing will kill the flightline quicker than the sight of you scurrying around outside the hide. Only leave the hide to pick dead birds or tidy up the pattern if woodies start veering away in fright.

While flightlines tend to remain largely consistent over the course of time, i.e when pigeons are feeding on a field the line tends to be the same one that serviced it 10 or even 20 years ago, they can be slightly different, depending on the time of year.

Once pigeons gang up into the huge winter flocks, it can be incredibly difficult to predict reliable flightlines.

Sure, at first light it should not be difficult to work out where the birds are likely to come from, given that you should know where they are roosting, but after that it can be a real game of cat and mouse, as they are chased from one rape field to another.

Many a time I thought I had found a good situation, with pigeons flighting in small groups, only to realise that the line was only originating from a ploughed field the other side of the hedge.

In these situations, the mere act of setting up destroys the flightline, sending it in the opposite direction.

Seldom can you get the birds right back to their roost wood, where at least you would have some chance of predicting the flightline, because invariably they head straight for another rape field nearby.

SMALL IS BEAUTIFUL
In the spring and summer, when flocks of pigeons disperse to start breeding, decoying success is greatly increased, purely because more individual birds live on the minor flightlines, so have to watch for their pals joining the main ‘motorway’ lines leading to the best feeding areas.

That’s why, over the past ten years, as pigeon populations become more and more urban, their flightlines out to the feeding grounds originate from numerous locations, from back gardens to municipal parks.

By the time they join the motorway close to the field in question, it is likely to be in the form of a constant procession of ones and twos, exactly what us decoyers require to make large bags. Avoid firing at large bunches of woodies as they come to the decoys. Best bags are made when they come in two or three at a time.

These days, having shot the farms on my patch for 40 years, I have a shrewd idea of all the potential flightlines to any of the fields at any given time of year, and will get excited when a certain crop falls on a certain field, as experience tells me that the lines servicing that field come from areas holding large numbers of birds.

It might all seem very random to the uninitiated but it’s surprising, if you really watch pigeons on the wing, how you too can learn how to think like one, and recognise when it is going out to feed, and more importantly where.

Folk often tell me I am lucky to find the number of shootable situations that I do, but I am sure that’s because I try to think like a pigeon.

Nobody has yet suggested I am beginning to look like one, but I am sure that will come!

PIGEON POINTERS
» Use a pair of binoculars to pinpoint a flightline by following pigeons after they fly out to feed from their roosting wood.

» Always clear birds from a field before setting up your hide and decoys. Make sure the flock is well away before you start to shoot the first returning woodies.

» Don’t let the sound of your gunfire ‘kill’ a flightline. You can lessen the disturbance by firing across the wind, rather than down it.

» Only leave the hide to tidy the decoy pattern/pick dead birds when it is absolutely necessary. The sight of you on a field will turn approaching birds and ‘break’ the line of traffic.