If you don't clean your gun regularly you're storing up problems

Take 10 minutes to clean a semi-auto shotgun properly every time you use it and you’ll avoid a lot of issues.

Another reason is that you also save money on repairs and get more for it if you ever want to trade it in or sell it.

Lack of cleaning cost me money

A while ago I had a semi-auto I used for wildfowling. Whilst I kept the outside and the barrels clean I didn’t really take the action to bits because it kept working without issue.  Eventually I took it to the shop for a trade-in thinking I was going to get a good deal. However, to my horror the expert in the shop showed me all the damage I had done by neglecting to clean my semi-auto inside. I didn’t get the trade-in price I wanted either. So I learned my lesson and vowed it wouldn’t happen again.

Here’s how to clean a semi-auto shotgun

I tested out some cleaning kit I’d been sent

Most shotgun cleaning is really pretty straightforward. Wipe the barrels over externally and inspect them internally for heavy fouling.  Plastic wads can add to the issue if you’ve had a heavy clay day but thankfully most grounds now are restricting use of plastic wads. Left unattended, plastic wad fouling will lead to pitting in the chamber and forcing cones.

For over-and-under and side-by-side shotguns that’s pretty much it other than inspecting for issues such as bangs or dents to the barrels and rib.

Semi-automatic barrels need a little extra. I keep a couple of pipe cleaners to keep the gas vents free of debris, especially on the smaller gauge guns using a gas recoil action. The smallest amount of detritus can have quite an effect. I always leave the barrels dry and only use WD40 to wipe over, the reason being that over the years I have seen a lot of oil soak damage to the head of the stock where people have left an amount of oil in the barrel and put the gun in the cabinet for a time. Gravity takes over and the oil drains down the barrel through the action and comes to rest at the head of the stock, casing it to crumble away over time.

I remove the chokes fully and wipe over the threads making sure they are in good condition. Again a light oil or WD40 helps keep them from jamming. If you are going to grease them then use the right stuff. A friend of mine once used graphite grease and it almost glued them in with the heat created from a couple of hundred clays!! And remember the chokes only need to be finger tight!

Give the action a quick wipe over to remove build-up and check the top lever comes back to the right place. Semi-automatics need a full stripdown. They are dirty beasts and depending on the make and model this can be the death of them! I can’t emphasise this point enough. If you own a semi-automatic then please learn to strip it properly. It can save you a lot of money, time and effort if you know how it comes apart and goes back together! I will always lay out the pieces in order and orientation so they go back the same way they came off. I once spent ages on a Remington that wouldn’t work only to find the gas parts were upside down.

As with barrels, I personally keep oil in the action to a minimum in my semi-automatic. I found that all the grit and sand from the marsh gets into all the awkward places and can cause issues if allowed to stay there!

After a particularly wet day I will take the stock off the action just to make sure all is well inside, and check the interior is  clean and corrosion free.

A much cleaner trigger after attention

I had been sent some cleaning gear to try out from the team at Precision Clean up in Dumfriesshire, so it made sense for me to use it for the semi-auto. I was impressed by the make-up of the kits I had been sent to test. The non aerosol sprays are in keeping with keeping the carbon footprint down and as the company say on the leaflet they want to give the customer product, not propellant. You can buy the same cleaning gear yourself from Ammo Pro Gun or Gardners Guns. Prices start at £5.95 for the Precision Oil. 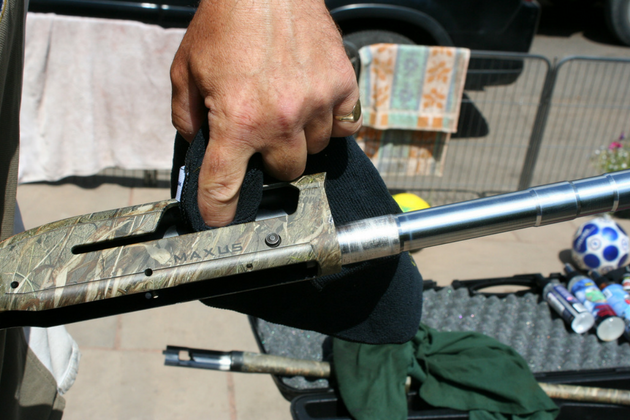 The Precision Clean kit consisted of the following:

Also I was also sent a firearms cleaning kit to try out on my rifles but with the amount of carbon buildup on the magazine tube I simply had to pinch the Raptor XC3 carbon and copper remover (designed for bore cleaning) as it’s really good at removing the carbon fouling on the magazine tube and on the gas parts where the bleed off from the recoil system deposits itself.

After a carbon clean

All the stuff did exactly what it said on the tin, so no complaints from me.