Venison kebabs on the barbecue

Summer evenings are in sight and it’s darker much later.

That means it’s time to start thinking about barbecues and so we’ve put together a list of our most popular barbecued venison recipes to browse through, by various chefs.

Shooting Times contributor and chef José Souto says: “Over the years I have cooked many different cuts of venison on the barbecue and as a meat it lends itself well to this sort of cooking, whether it be cooking on the fiercely hot coals for quick sealing or to the more temperate slow coals for a larger joint and slow cooking. Both the smoke and the barbecue’s ability to enhance and add flavour to the meat is well known.

“With all first class cuts such as steaks, loins and pavés build your fire, then once white hot seal the meat quickly so that you get those tell tale bar marks that seal the flavour in. Then move the meat to the edge of the grill or to another level pulling away from the heat, allowing it to continue cooking but without burning. Larger joints, such as butterflied hunches, again need searing but a longer cooking time due to the dense muscle structure . This can be done with a baffle stone on some barbecues, they slow down the cooking and irradiate the heat in a more uniform fashion, again slowing down cooking. This can also be done by sitting the meat on a triple layer of foil after sealing if you do not have a baffle stone.

“Second class cuts can also be cooked on a barbecue;  shoulders and ribs cook well but the secret is to marinate then cook at a low heat and over a long time. Allow the meat time to breakdown and become tender without drying out.”

Easier on the wallet

Head chef Mark Kempson of Kitchen W8 (which was named Best Restaurant in the 2022 Eat Game Awards) is a big fan of venison and game. He says: “Venison is lean, healthy and bursting with protein (much more than most other meats we eat). It’s easy to find in the shops when in season, and even out of season, lots of butchers have frozen venison. It’s much easier on the wallet than a prime cut of heritage breed, grass fed steak. I love the versatility of this meat – and on a barbecue, it is really tasty. It’s always important that you bring any meat up to room temperature before cooking and then let it rest for a good while after cooking. For barbecuing, I go hot and quick for leaner cuts (like loin) or low and slow for larger fattier cuts.”

Find Mark’s  barbecued venison recipe below. (In addition, if you think a London restaurant is beyond your budget, bear in mind that Kitchen W8 has a two course lunch/dinner menu for £31.50 a head, which would be a delicious treat and superb value. )

To barbecue successfully you’ll almost certainly want to marinate the venison or game you’re cooking first, so here are some useful marinade recipes to try.

“To my mind, one of the best things about making your own sausages is getting to choose exactly what goes into them, says Barry Stoffell.” We couldn’t agree more.  These sausages will sizzle away deliciously on the BBQ with a tempting aroma. Perfect for when you’re sitting around in the evening, catching up with friends.

Cai Ap Bryn says: “You can cook these burgers on the barbecue, but make sure the grill is at target temperature before placing the burgers on it. It is vital to cook them fast  to seal in the moisture and add colour.”

Muntjac is the ideal venison for these stunning kofta kebabs, says chef José Souto. Cook the kebabs for about three to four minutes on each side. 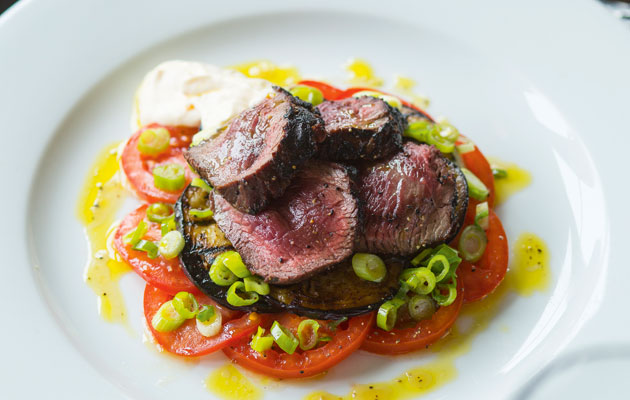 In the summer, venison makes for a much tastier and healthier barbecue than beef. This venison recipe offers a simple dish that is rich with flavour and quick to cook.

Venison kebabs on the barbecue

Make the marinade by whisking all the ingredients, apart from the salt, together. Pour over the venison loin in a suitable sized dish. Cover and allow to marinate for 12 hours in the fridge. I recommend turning the venison once during the marinating.

To cook medium rare, remove the venison from the fridge 2 hours before cooking. Preheat the barbecue to an optimal cooking temperature.

Remove the venison loin from the dish and scrape off all the marinade. Season the venison with sea salt and place on the preheated barbecue. Allow it to slightly char – roughly 3 minutes – before turning and repeating the process on the other side. Remove from the barbecue and allow to rest for 8 minutes before carving.

Carve the venison into 12 even sized pieces and put it onto a large, warmed platter. Serve immediately with your favourite seasonal side dishes.

There’s nothing like eating outside on a warm evening