Here's a definitive list of some of the best places you can go pheasant shooting in the UK. If you have any to add to our list, please leave a comment below.

Are these the best pheasant shoots in the UK?

A grand shoot with a pedigree to match its current position as one of the country’s best-known driven pheasant shooting destinations. This shoot is steeped in history and in 1909 the then UK record one-day pheasant bag was shot on December 5: 3,824 pheasants, 15 partridge, 526 hares, 92 rabbits and three various.

The bag numbers are not quite like that these days and the 20th century saw many ups and downs at Warter Priory, but the shoot is definitely on the A-list again now. Lying in the pretty Wolds near the market town of Pocklington the landscape lends itself to good shooting (pictured above). This 6,000-acre estate contains seven miles of the South Downs ridge, so it’s immediately obvious that high birds might be on the agenda. And so they are on the 40 plus let days here every season. With spectacular drives to choose from it’s not unheard of to shoot just four drives in the day here. After all, why rush around fitting six drives in if you just don’t have to?

Several drives regularly see a cartridge to kill ratio of more than 10:1 and that is probably why over the last 10 years it has built a reputation for showing high-flying birds which tax the best. Oliver Pope is the sixth generation of his family to run this marvellous 1,700-acre Dorset estate and its famous shoot. Drives like Wrackleford Plantation and Great War provide superb sport and in a recent shoot report Shooting Gazette’s John Walker said: “Fast arriving tall pheasants, gliding on set wings before rising rapidly to clear the tree line behind them, give the line a good test of mental reflex and physical ability. Classic English game shooting.”

There are a number of famous Exmoor shoots, including North Molton and Chargot for example, but the shoot at Castle Hill is consistently rated the best by those in the know. That said you are unlikely to be disappointed at any of these famous names when down in this part of the UK.

Headkeeper Brian Mitchell was at Miltons and Chargot before he arrived at Castle Hill some 25 years ago. There are few keepers who know more about presenting high pheasants and this certainly shows on shoot day here. But perhaps you should think about spending a few days down on Exmoor. That way you can really get your eye in at the UK’s undisputed regional home of high bird shooting. Andrew Witham is the jovial host behind this Lancashire gem. With birds coming off moorland fringe at terrific heights and the likelihood of strong winds, shooting here can be extremely tough. In fact it’s not uncommon for good teams to walk away from some drives scratching their heads and wondering what just happened. Despite the fact that Andrew has recently had to relinquish some of the land back to the owners for some grouse moor development, it is still a fantastic shoot and the hospitality is second to none. The 7,000-acre home of the Earl of Annandale offers excellent pheasant shooting, as well as a suitably grand mansion in 500 acres of parkland. The sandstone house was built by James, the 3rd Earl of Hopetoun, towards the end of the 18th century and it lies between Dumfries and Moffat in south west Scotland and is part of Annandale Estates. There are 22 different drives and 400-bird days are possible for pheasants and partridges, dropping to 250 to 300 mid season and 150 to 200 later on. Robert Rattray of CKD Galbraith said: “Many drives take place in deep valley bottoms which lend themselves to exciting shooting. The variety of drives on the estate allows for guns of various abilities, and the entertaining here is among the best available.” This is one of Scotland’s finest pheasant shoots and is on the 15,000-acre Tillypronie estate, owned by the Hon. Philip Astor. Superbly presented high pheasants and a comfortably relaxed management style. The shoot certainly warrants its impeccable international reputation.

This is a traditional pheasant shoot in beautiful surroundings. It is primarily run as a family shoot but there are let days available. The Apley Park and Apley Terrace beats in the River Severn valley are ideal terrain for game shooting. Apley Terrace is an escarpment which follows the River Severn and is completely wooded. This makes for some truly testing pheasant shooting, with snap shots, diving and curling birds and good high birds. Meanwhile, the park drives allow the guns to enjoy the experience of shooting on the grassland in front of the main house. Here the pheasants come towering from the hilltop spinneys, which were created for that very purpose by our forward-thinking shooting forefathers. The ultimate name in high bird shooting. The landscape is ideally suited for pheasant shooting as the estate straddles both sides of a deep and narrow valley, ending at its northern most end in the Allen Valley gorge. This is where some of the highest and most renowned drives are situated. Elsewhere, hanging woods on steep hillsides provide challenging sport in dramatic surroundings.  An intermediate day will probably have a couple of high drives with a couple that are a bit easier, a high day will all be high and an extreme day is for high bird experts with big cartridges. 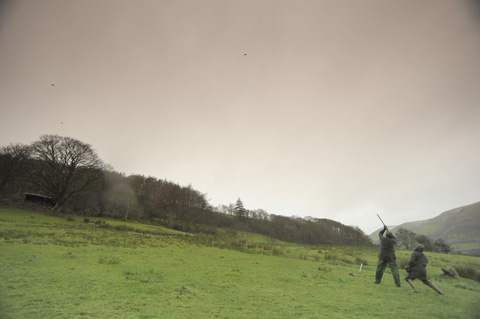 This now famous shoot lies in the suburbs of Snowdonia National Park and, as you might expect, is able to present some stratospheric birds in equally impressive scenery. It is one of eight stunning shoots owned and run by the Bettws Hall shooting group of Gwyn and Ann Evans. Other well-known names in the stable include Vaynor Park, and Molland.

Another top shoot in Wales is Llwyn Madoc, near Builth Wells.

Terriers bring a smile to our faces, whether the smug condescension of the handler of well-trained gundogs or the rictus of embarrassment that comes from having thought your dog’s behaviour could…