Crossers are one of the most common clay targets you'll come across. Here's how to nail them

The clay that’s crossing in front of the stand is probably one of the most common clayshooting targets you’re ever likely to encounter on an English sporting layout. But that doesn’t necessarily mean that everyone is good at breaking them.

Although it would seem that crossers should be easy to hit, that’s not the case.

You’d think they’d be easy because:

Get them right and your scores will improve satisfyingly.

You might hit clays travelling from right to left but miss anything going in the other direction. I sometimes refer to this psychological problem as a shooter ‘hitting a wall’ and it’s a mental thing where the shooter simply can’t swing the muzzles past a certain point.

To solve it, mentally take a step backwards, reassess what you’re trying to do, follow your normal shooting procedure and concentrate on simply hitting the clay. 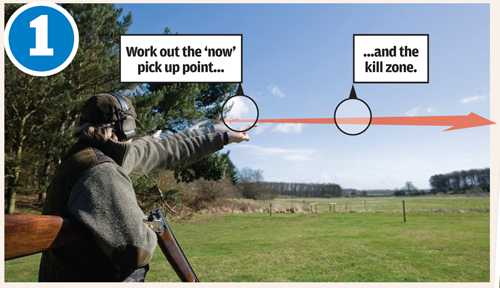 Say ‘now’ when you first see the clay

As you’ll always see how the clay is going to be presented before it’s your turn to shoot, here’s a little tip: Watch for the clay as it’s called and say to yourself ‘now’ when you first see it.

There’ll inevitably be a slight delay between the point when you pick up the clay visually and the moment you say now.

The ‘now’ point is the ‘actual pick up point’ as your brain takes time to register the fact that your eyes have seen the clay is in flight.

As such, you need to get the muzzles of the gun slightly ahead of your ‘now’ point, with an initial stance to match, so that you’re in the ideal position to swing and fire.

If you don’t you’re going to be playing catch-up.

If your feet/stance position was set for the perceived ‘visual’ pick up point – and not your ‘now’ point -you might find that your upper body cannot physically turn enough to take a comfortable shot. This target can often be a bit of a bogey clay for shooters. The way to deal with it is to try and treat it in exactly the same way as you would a conventional crosser.

Watch how the clay is presented. Tracing the flight line of the clay with your finger will definitely help imprint the clay’s line of travel in your mind.

Knowing the precise path of the clay will enable you to judge your initial pick up point and also your intended kill zone.

Then consider your stance and mount. Don’t even think about trying to shoot ‘gun up,’ as this will tempt you into aiming at the target – and you’ll find the gun gets very heavy, very quickly.

Keep your weight forward, remembering that in this case there’ll be no reason whatsoever to transfer weight onto the back foot.

To make sure you don’t physically ‘run out of swing’ (and by that I mean you can’t swing the muzzles any further without moving your feet) position the toe of your leading foot towards the kill zone.

Keep the stock just out of the pocket of your shoulder with the muzzles of the gun pointing at, or just in front of the pick up point. Make sure you keep the barrels just below the flight line so that you don’t obscure your view of the clay.

Just as the target is nearing your kill zone, bring the gun up into the shoulder – making sure your face is planted firmly onto the stock. Although there’s no real hard and fast ‘best’ shooting style to nail this type of clay, I reckon that the good old pull away method will give consistent results.

As such, the important thing to remember is to keep the swing going and let its inertia and acceleration get the muzzles ahead of the target in a smooth and unhurried fashion.

Without stalling, and when your instinct and hand/eye coordination tells you that everything is correct – pull the trigger.

Always remember – get the basics right; the preparation, stance and swing, and breaking this type of clay can be simplicity itself as it relies more on ‘instinct’ than style.

When clay pigeon shooting, the driven crosser is certainly not a ‘typical’ bird you’ll find described in many books on…

If someone chucks an object towards you, you’ll automatically move forward, extend your arm and catch the thing.
You don’t hesitate, wondering to yourself, hmm, how fast exactly shall I move forward? And how far shall I stick my arm out?

Instinctive shooting works in exactly the same way… but remember, in shooting parlance, getting yourself ready before the ball is thrown simply makes it easier to catch!

These are probably the easiest of the crossing clays to master, probably because as the clay is travelling closer to the ground its speed and line is easier to assess.

A classic mistake when shooting this type of target is to shoot high and miss over the top, so it’s important you keep the muzzles just below the line of the clay.

Also be aware the flight line might deviate as the clay loses momentum at the end of its travel so you’ll have to allow for this before shooting, if you have to take the clay late.

These are the trickiest. Choose your stance to accommodate your chosen kill point, then bring the muzzles halfway back towards the trap, this should be somewhere just after the visual pick-up point. Because it’s a really quick clay, the kill zone is limited.

Try to swing through or pull away on this type of clay and the target will probably be off and away over the horizon before you’re ready to pull the trigger. As soon as you pick up the clay visually start your swing, keeping the muzzles ahead of the clay.
To a certain degree, you must let instinct take over – when you feel the lead is correct pull the trigger and let the shot string do the rest.