The game season is over and it is all hands on deck for a spot of serious vermin control, and in my neck of the woods that generally means trying to get to grips with the ever-growing populations of woodpigeons, rabbits and, believe it or not, bloody grey squirrels.

Squirrels I hear you say! Now what sort of a problem could they possibly be on a clay ground?

Well, the little sods chew through the cables that control the traps – and on ground the size of ours that’s a serious problem.

And that’s why the vast majority of the traps on my stands now have radio release buttons – I found I was spending hours thumbing through miles of cable trying to see where the little sods had broken the circuit by chewing through the wiring.

Anyway, I digress. In the real world squirrels should be treated in exactly the same manner that you would tackle any other target – the only trouble being with shooting squirrels is that they’re so unpredictable and quick.

That aside, their movements can only ever be in three dimensions; they can run up and down, go left or right, away or toward and, when jumping from tree to tree, fly a bit as gravity takes effect.

So then, when we look at them in this context we’ve got several types of targets that we can equate to what we’d call ‘normal’ clays. Up and down are crow/teal types, the left and rights are typical crossers, towards and away are incomers and driven birds and the flying rat could easily be reconciled with the run and bounce commonly seen on a rabbit stand.

The only other variation to consider is the static target, an anomaly in the shotgun world, and something we never see on a sporting layout.

When you’re trying to line yourself up to pot a squirrel that’s dashing among the branches from tree to tree you often don’t really have time to think about your stance and ready position.

As such, you need to try to be ready to spring into action immediately – out and out proper snap shooting.

Always try and keep your weight forward as you creep through the woods, with the gun, muzzles up, just out of the shoulder pocket. Certainly don’t have the gun down at your waist.

If you’re hunting a squirrel try and keep at 45° or (approximately) ‘square on’ to where you think your kill point is likely to be, this will ensure you have no restriction on the gun movement and are able to keep the gun swinging freely, left, right, up or down if the squidger suddenly changes direction.

A bit of practice

Admittedly it’s nigh on impossible to practice this type of squirrel shooting on a regular basis, but it wouldn’t hurt to have a few hours shooting the rabbit stand at your local club as this is probably as near as you can get to simulating an unpredictable target.

Although the clay target can be unpredictable – the dreaded bounce – it’s still worth being methodical in your approach if you want to break more clays or, harking back to proper vermin control, kill more rabbits.

Knowing where you want to kill the target can help eliminate one of the most common mistakes when shooting bolting rabbits – trying to shoot it too soon after it leaves the trap.

Position yourself with the muzzles pointing too close towards the trap and you’ll invariably find that the clay shoots past you before you’re ready, forcing you to chase after it with the barrels.

Because of your incorrect position, you’ll run out of swing, the muzzles come off the line of the target and you’ll miss.

Addressing the kill point correctly, then turning from the waist to find the pick up point will greatly enhance your chance of success.

Remember, irrespective of whether it’s a clay or live target, to always try to ‘shoot at the front feet’.

Shoot at the ‘ears’ and you’ll invariably miss high. Incidentally, it’s also worth noting that rabbit clays are physically tougher than ordinary clays. 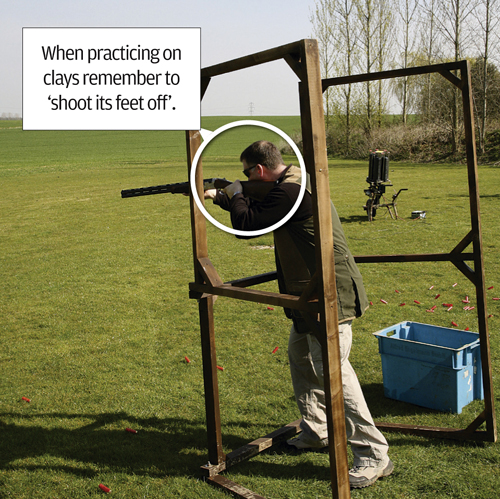 Depending on how the clay is presented, ie: the angle in front of the shooter, don’t be afraid to increase the shot size or tighten the choke of your gun if possible.

Over the years I’ve seen dozens of clays that have been hit by the shot but haven’t actually broken.

If the rabbit is quartering away from you it’s possible that the pellets can ricochet off of the clay instead of breaking it.

Any shotgun shooter will have a natural affinity with a moving target; swing ahead, pull the trigger and keep the muzzles moving – but the static target can cause a few hiccups simply because we encounter it so infrequently. 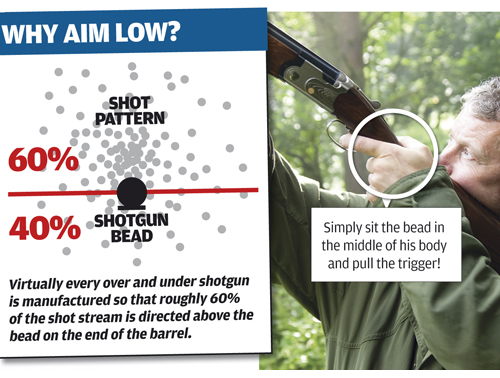 The trick here is to let the gun and the natural pattern of the shot do the work for you.

Virtually every over and under shotgun is manufactured so that roughly 60% of the shot stream is directed above the bead on the end of the barrel.

With this in mind, as soon as the squirrel stops moving simply sit the bead at the end of the barrel in the middle of his body and pull the trigger!

It’s probably the only time you’ll ever ‘aim’ a shotgun.

Don’t forget, though, that you owe it to any live quarry to ensure a clean, instant kill and your normal clay cartridges might not be up to the job if you’re shooting through branches.

30-gram sixes should be perfect.