Some of the most highly experienced pigeon Shots I know of were discussing their preferred steel shot for pigeon shooting loads and their opinions blew holes in some of the received wisdom that we have in the public domain. There was no mention of bismuth nor any of the derivatives of tungsten for the simple reason that these pest controllers — some professional, some semi-professional — are firing tens of thousands of cartridges at pigeons each year. Anything other than steel would be prohibitively expensive.

The general consensus is that you should move up two shot sizes from your traditional lead load when switching to steel shot. But it is possible to use smaller loads than we usually assume if you get the correct combination of choke and skill. The risk of damage to a barrel is on a sliding scale with the two variables of choke and shot size. The more open the choke and smaller the shot, the less risk of bulging your barrel.

Of course, the opposite is also true, but again this risk decreases with higher-quality steel and the level of proofing of your barrel.

So while steel No 7 shot, which is really designed as a clay load, will kill pigeons that are decoying well through tighter than half-choke, it is probably not a good all-rounder when the birds are sketchy and on the edge of the pattern. There is also the question of meat damage with dense clouds shot through tight chokes at closer range. This should always be about a food product and this has to be considered.

No 7s therefore are not recommended. If we consider 30g 6s to be a standard pigeon and general game-shooting load in lead, it was interesting to see some support for a 28g steel load with options in 5 and 4 shot.

These were Hull Steel Game Extra but are currently a plastic wad, though Hull has told me that its new Hydro Wad is in the final phases of testing and is about to be launched. Many of its current steel line-up will no doubt be on offer in these loads and sizes. I have used 28g 4s to good effect on pigeons drifting back into woodland, though there is a definite limit to their range and what can be accomplished with them.

One individual, who I know to have shot tens of thousands of pigeons using Eley Pro Eco Wad 32g 5s and 3s, has an experience that mirrors my own with these cartridges. His summary is that the cleaner kills are to be found with larger pellets and tighter chokes. I didn’t get on with the 5s but found the 3s superb through 5/8ths choke in a high-performance steel-proofed barrel.

It was interesting to note that for me the perceived recoil with the 32g 3s was also less than the 28g 7s from Eley’s Pro Eco Wad range, though that may have been because recoil becomes more of a factor shooting clays than in game shooting and pest control. There is an element of controlled aggression in a pigeon hide that masks felt recoil, which is perhaps replaced by concentration in a Sporting clays stand, where recoil becomes more disruptive.

My most recent outings have been with one of my favourite steel shot for pigeon shooting  over the past few years: RC Atomic Line high-performance steel 34g 3s. With these, my decision-making in a hide has not altered from the days when I shot lead — if I leave the pigeon, it is because it is beyond my ability to have a more than reasonable chance of killing it cleanly. I would have done the same with lead.

My foreshore load of choice is always the Magnum Atomic Line version of this load in 36g 3s and 1s. The 3s are my preferred load flighting wigeon but if my reconnaissance leads me to believe that geese and high mallard are likely, I move to 1s.

Of course, both these cartridges are high performance and come with the ecological drawback of the plastic wad. On my outings over drillings, these fall in an arc in front of the hide and are easily retrievable, but that is not so on the foreshore, though admittedly the number of shots is far fewer. 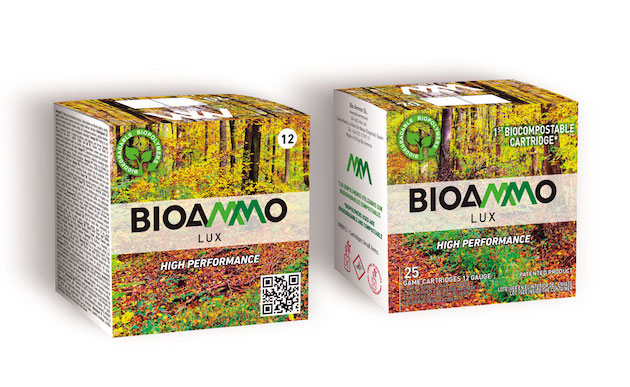 As for the new products I have shot recently, BioAmmo’s cartridges, with their biodegradable plastic wad and case, were highly effective, though because they were not widely available pre-lockdown, the sample of my experience is less than with other more established steel loads. But the options in the range are beginning to mirror other brands.

Having felt the Eley 5s were not for me, the 30g 5 BioAmmo version was through the same choke, and it may be that this maize starch resin is a little less flexible than the Pro Eco Wad. In the early version I tested, the slots in the BioAmmo wad extended 15mm down a 37mm shot cup — less than halfway. This may mean they pattern a little tighter and may have been a factor in leaving me open-mouthed at one pigeon I killed cleanly at range, which I still remember now.

It may surprise some that there has been a steel cartridge with a biodegradable wad on the market for some years in the UK — Gamebore’s Precision Steel. It is loaded in a 32g 4 only and in a 3in case, so it does not appeal to all buyers. It was effective in a pigeon hide and killed birds well, but I found the felt recoil unpleasant, even through a gas-operated semi-auto.

It wouldn’t surprise me if Gamebore’s new line of Dark Storm Precision Steel with its Bio Wad and Quad Seal — designed to provide the gas seal they get for a plastic wad — replaces it in time. Precision Steel is advertised as loaded in 32g 3, 4 and 5 on its website, though it does not appear to be widely available yet.

Gamebore’s Mammoth loads continue to hold their reputation among wildfowlers who don’t load their own and are available in a 3 1/2in option. Both are plastic wad.

For 21/2in chambers, Eley has a Grand Prix Traditional Steel with its Pro Eco Wad, and BioAmmo has announced that its Blue shot will be available in 67mm. Blue shot is a new amalgam that has similar performance to standard steel but without the risk of barrel abrasion. It may be suitable for older guns with perhaps thinner walls or damascus barrels.

For shooters of small-bore guns, the options are fewer and further between. The fact is commercial priorities mean that 12-bore and 20-bore products will be developed first before the more niche markets of 16-bore, 28-bore and .410. The current options in bismuth are available for the most die-hard fans.

Through this transition, cartridge manufacturers have to make a return on their significant investment in new machinery components and product development. I am resigned to leaving my 16-bore in the cabinet and shooting a 12-bore as new products arrive over the next few years. This is a fast-changing landscape and, far from wasting time mourning lead, I am heartened to see that level of invention and product development from the industry.