Get it wrong and you'll get some dark looks

Finally the season has started and you’re out on your first driven pheasant day. It’s been a while. So you’re on the peg and the birds are soaring towards you.

But how do you know which pheasant to aim at? Which is yours and which is the property of your neighbour? Get it wrong and you’re in a serious breach of etiquette. (Might be worth reading what to wear shooting while you’re at it.)

Here’s our guide to getting it right. 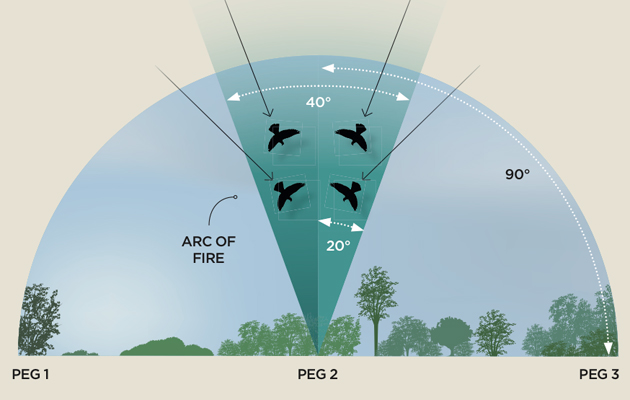 If a dead pheasant lands in front of your neighbour’s peg it doesn’t mean that you shouldn’t have shot it. You might shoot a bird out in front of your own peg, but if it’s a crossing shot, or going down the line, then there’s nothing you can do about it. The bird will end up falling by your neighbour’s peg, or even beyond it. There’s little wrong in that, so long as it doesn’t hit anybody on the head.

A useful rule to follow is that if you think a bird going to make a better shot for your neighbour, you should leave it. (Read more tips pheasant shooting.)

What about low birds?

Taking low birds is not just unsporting and embarrassing, it’s downright dangerous, and the sooner you can nip it in the bud, the better.

Hedgerows, woodland, individual trees or other objects are a great reference point for judging the height or range of a bird.

On flat land,  keep your eye on the bird, and watch it climb. The higher it gets, the smaller it appears.

Hedgerows, woodland, individual trees or other objects are a great reference point for judging the height or range of a bird. These things give perspective and context to everything else in the landscape

Birds not to shoot

This piece was originally published in 2014 and has been updated.