I took the train up to Perthshire because the thought of a lonely six-hour drive from the Midlands was too tedious to contemplate. England’s east coast melted away as the carriage climbed further north, and whether it was a mysterious copse way up a distant hill on one side of the window or pocket-sized villages on the other, I was distracted from my required reading on Logie headkeeper Antony James far too easily. Nonetheless I was building up a picture of my 28-year-old host/shoot tenant/headkeeper with every passing station.

And by Newcastle I’d made up my mind to ask him how on earth a Yorkshireman his age had ended up running a 2,800-acre shoot on land owned by the Mansfield Estate, Scone Palace, as soon as I could. We had never met before; all I knew was his father, Gerry, was shoot host and his mother, Rosanna, was the accountant-cum-caterer.

Meeting on the windy hillside a few miles outside Crieff I immediately learned two things: the James family had lived in Scotland for 12 years and Antony had studied countryside management to HND level at Perth College before heading south to work under Mark Osborne as a beatkeeper at Bransdale. I was left in no doubt that this was a position that fully prepared him for the harsh realities of keepering. 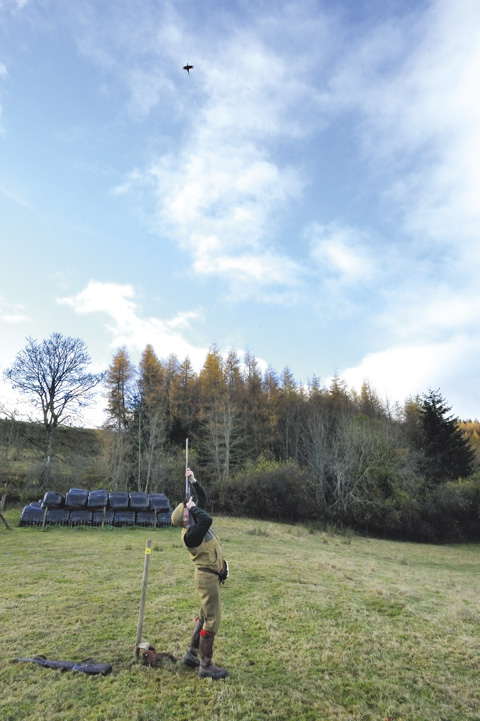 Back where he belongs

Despite enjoying the challenges posed by working at Bransdale, Antony struggled to see his young daughter back in Scotland without a troublesome six-hour commute. He decided to leave Bransdale on a high. A more family-friendly stint working from home in Perthshire for a friend’s IT company brought many perks but it was an alien environment for someone who hankered after the trappings of his former profession.

“I was missing keepering and was starting to look for a small shoot I could run on a part-time basis. A friend came to me and explained that Logie was about to become available. I know this area very well so contacted Scone Palace, had a look around and was given first refusal. The shoot wasn’t anything like what I was looking for originally and the price was well above my budget, so I approached my parents for financial support. My parents have been incredibly supportive all round.” 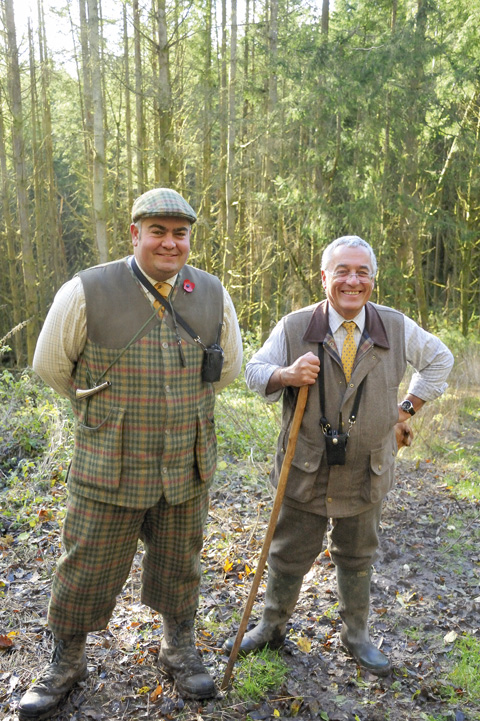 The partnership of Antony James and his father, Gerry, is helping Logie show its potential.

While sitting in the stone shooting lodge with its roaring fire licking white and purple flames out into the room, it struck me just how hard the last 18 months have been on Antony. He has not had it easy; grey hair has almost completely consumed his head – fighting for attention against the black on the brows – and his eyes scream for a moment’s rest. Although not a man of few words – he spoke with wit and honesty the entire time we were together – it was apparent that whatever sense of purpose or direction he might have lacked after Bransdale has re-emerged at Logie, despite him having to do most jobs by himself.

Building a reputation at Logie

“There was a lot of work that needed doing to the ground and I’ve done this in conjunction with the Mansfield estate. For example, there is a slate quarry on the moor and we’ve been able to use their crusher to get the roads up to scratch just to get to the drives. I have managed to build up a good relationship with the tenant farmers on the estate and kept them up to date with what’s happening on the shoot. Another way we’ve been able to support them is through vermin control. The farms here are mainly sheep farms and they were losing too many lambs to foxes. We have kept on top of the foxes as well as deer, pigeons, rooks and jackdaws that were damaging crops.”

Is that too much work for one man? 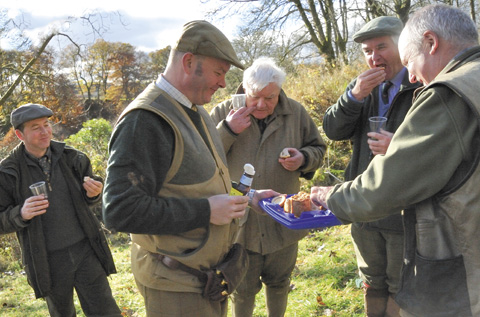 Refreshments out in the field after a solid morning’s shooting.

“There are days when I’ve got to smile otherwise I’ll just burst into tears. A lot of effort has gone into this shoot and I’m determined to make it work. When people come to Logie I want people to be able to say “Antony James does a really good job,” and that’s what I’m really working for here.”

Despite the seemingly endless list of housekeeping jobs, Antony is thinking about the future even now. Grouse shooting is a part of that future and it will mean a great deal if he is able to add that enviable string to Logie’s bow, possibly putting him in a position to offer two shoot days simultaneously. Is he putting first things first, though?

“I’m hoping that in another few years once we’ve recouped our losses we’ll be able to expand. There’s no point doing it now and running at a loss all over the shoot. I am getting emails asking for 100, 250 and 400-bird days and it’s soul-destroying when I have to turn them away. I’m already looking at expanding and the potential for partridge shooting on some of the low ground near here is phenomenal. There is a lot of room to make existing drives better, producing higher birds and to vastly improve some of the small drives, again to give higher and better birds on shoot days.” Adding to the bag on Kirkden was as difficult for the dogs as it was for the guns.

Antony draws heavily on Gerry for support. Antony caught the keepering bug while helping him run a small shoot back in Yorkshire and now, with father working for son but son being funded by father, the relationship between the two is an interesting one.

“My Dad is a typical shoot captain because he’s never on his radio when you want him. I have to bite my tongue when we’re having an argument because he’s the reason I’m able to do all of this.”

For all the long nights and days and the added zest of the Scottish weather, the James’ stamp on the shoot is becoming more and more visible. Logie is an extremely well-kept shoot, beaters and pickers-up are highly efficient and plans B, C and D appear to have been thought up well in advance should there be a problem. Around half of next season’s days have already been booked up, and the likes of Guy Fenton, who organised this shoot day for his team, will hopefully return again and again.

“Antony is committed to gamekeepering and is also an out-and-out grafter,” said Guy. “He has knowledge of the type and quality of birds that each party of guns expects. The whole shoot is at least equal to any other professionally run shoot of the same type. It will even match, or be better than, those perceived to be of a higher quality.” 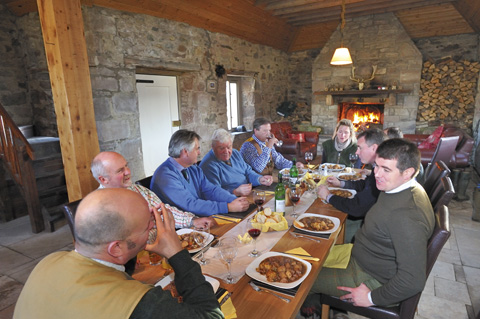 Much of the off-peg activity at Logie, like this lunch prepared by Rosanna James, is held in the shooting lodge.

Anthony said: “What I have always enjoyed as a gamekeeper is hearing the guns say thank you, telling you how much they have enjoyed themselves and then listening to them discussing the day they had. My proudest moments so far have been the times when the guns have shaken my hand and told me I have done what I said I would do – it feels fantastic to hear guns tell me that birds are flying higher than in my first season.”

Antony and Gerry might be father and son but they are also business partners with focus and an ambition. No amount of clichés will express how good the birds are at Logie; all you need to know is that they fly hard and fast – very hard and fast. The variety of sport, whether the soaring cocks on Long Bank or the jinking hens on Kirkden, is a testament to the work of a former Bransdale beatkeeper whose signature on the lease is still drying.

For more information on the shooting opportunities at Logie click here

Pennine pointer. It’s not a breed recognised by the Kennel Club and it’s not really a breed at all (like all crossbreed gundogs), but it…